A Field Guide to Mushrooms of the Carolinas 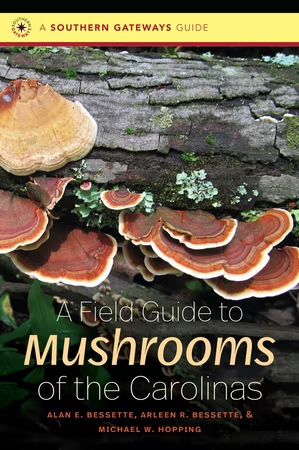 The organization of the book is typical for a field guide. Up front are Introduction (Regions and Habitats , Getting Oriented, Mushrooming Gear , What’s in a Name? Can You Eat It?), Mushroom Identification (Parts of a Mushroom, Fertile Surface, Spores, The Support Structure , Chemical Reactions, Microscopic Information , Habitat and Ecology ), How to Use this Book (Identification Keys, Frustration, Species Description Format), and Color Key to the Major Groups of Fungi.

Pretty much the standard stuff, but with occasional bits of misinformation. For instance, it is not true that Melzer’s reagent is a “federally controlled chemical unavailable to laypeople.” While it is true that it contains a controlled substance (chloral hydrate), Melzer’s itself is not a listed substance. And, although it is not always easy to obtain, it can be had by anyone with a little effort. If you are fortunate enough to live near a university with a resident mycologist, often (s)he will be willing to share the small amount one needs. If you aren’t so lucky, it is readily available in Europe and can be mail-ordered from some (although not all) vendors there, or, in the USA, a licensed physician can write a prescription to be filled by a compounding pharmacy (see Leonard 2019. Melzer’s reagent update, 2019. FUNGI 12[2]: 10). There is no evidence to support the notion that using a mesh bag to carry your collected morels has any effect on their populations — they are quite capable of dispersing their spores without our help. The “humongous fungus” in northeastern Oregon is not a single mycelium.The toxicity of raw/undercooked morels is not due to monomethyl hydrazine-type toxins like those of gyromitras, but rather to other, as yet uncharacterized, compounds. Not all crust fungi are decomposers, many are ectomycorrhizal.

The bulk of the text comprises the Species Descriptions and Illustrations, and the book concludes with A Thumbnail History of Carolina Mycology (interesting enough that I would have put it in the front of the book), Glossary (which inexplicably includes a lot of common English words such as angular, bald, central, concentric, and maroon, and do we really have to be told that musky means “having a strong odor of musk”?), References and Resources, Photo and Picture Credits, Index to Common Names, and Index to Scientific Names.

The 600 species descriptions are presented two per page following brief descriptions of genera or other groupings. Each includes a photo at the top of the column. The scientific name with author is given in a small font, often with a common name beneath it in a larger bold font. Many of the common names are fairly standard ones, but others, such as “plate full of pyramids lepidella” and “pale rose bolete” (the photo shows mushrooms with a dark red cap) are hard to appreciate, and ones like blackening russula, white coral, showy bolete, lilac bolete, and red and yellow bolete, could apply to too many different species to be of much use. The names are followed by a concise macroscopic Description, the Spore Print color, Occurrence, Edibility, Microscopic Features, and Comments. The regions and habitats described in the Introduction are not utilized in the Occurrence section and the distribution of the species outside the Carolinas is not mentioned. Both would have been helpful. The Microscopic Features are those of the spores only, nothing is presented about cystidia, cap cuticle structure, etc., even when such features are essential for identification, as in Inocybe and Tricholomopsis. The brief Comments typically consist of single-feature comparisons, or a non-specific “compare,” with one or two possible look-alike species and occasional bits of miscellany such as the meaning of the scientific name. Rather annoyingly, nearly every time a species that is not covered in the book is mentioned, we are advised to “search online.” Such advice hardly seems necessary but, if it is, it could have been given once in the How to Use this Book section. Some of the alleged look-alikes are puzzling, such as Mycena leaiana being listed as similar to Bolbitius titubans despite them being very different in shape, color, habit, habitat, and substrate.

The book claims that “more than 50 [species are] appearing in a field guide for the first time.” However, the actual number is fewer than 30 and even that total includes a sooty mold, a rust, and several leaf-deforming fungi that don’t produce mushrooms. With a few exceptions, the names are up-to-date, appearing to follow those in Species Fungorum.

The principal hallmark of most previous Bessette books has been very good quality photographs. However, many of the ones in this book don’t measure up to their past standards — some are excellent but all are hampered by their small size (about 2.5 inches wide) and almost square dimensions, so that a lot of unfortunate cropping was done to fit the format. The ones that show a small number of fruitbodies close-up are the most effective. Unfortunately, even many of these suffer from having been cropped directly through a fruitbody. Quite a few are underexposed and muddy or have off-color casts. Many others look as though the mushrooms had been dumped haphazardly onto the ground and then photographed from a distance while standing directly above them. Besides being unattractive, they lack sufficient detail to be effective for identification. A few of the photos, such as those presented for Cortinarius cinnamomeus and Porodaedalea pini, appear to have been misidentified and, in a few cases, the text description and photo do not agree. For instance, Inonotus hispidus is described as occurring on living hardwood trees but the photo shows it on a rotting log.

So, back to the original question — do we need another southeastern mushroom book? Overall, this one has little to make it stand out from the competition, other than containing a large number of species selected from a restricted area. But the high species count comes with trade-offs to save pages — small photos and very little helpful commentary. Carolina residents will benefit from the geographic focus and experienced southeastern mushroomers with established libraries will find it useful as an adjunct reference. However, a beginner or someone just starting to assemble their mushroom book collection would probably be better off with one of the other recent guides — Southeastern Mushrooms or Mushrooms of the Northeastern United States and Eastern Canada (despite its title, this book has quite a large number of species that occur in the Carolinas), or even my still-favorite for the area, Mushrooms of West Virginia and the Central Appalachians.