The Allure of Fungi 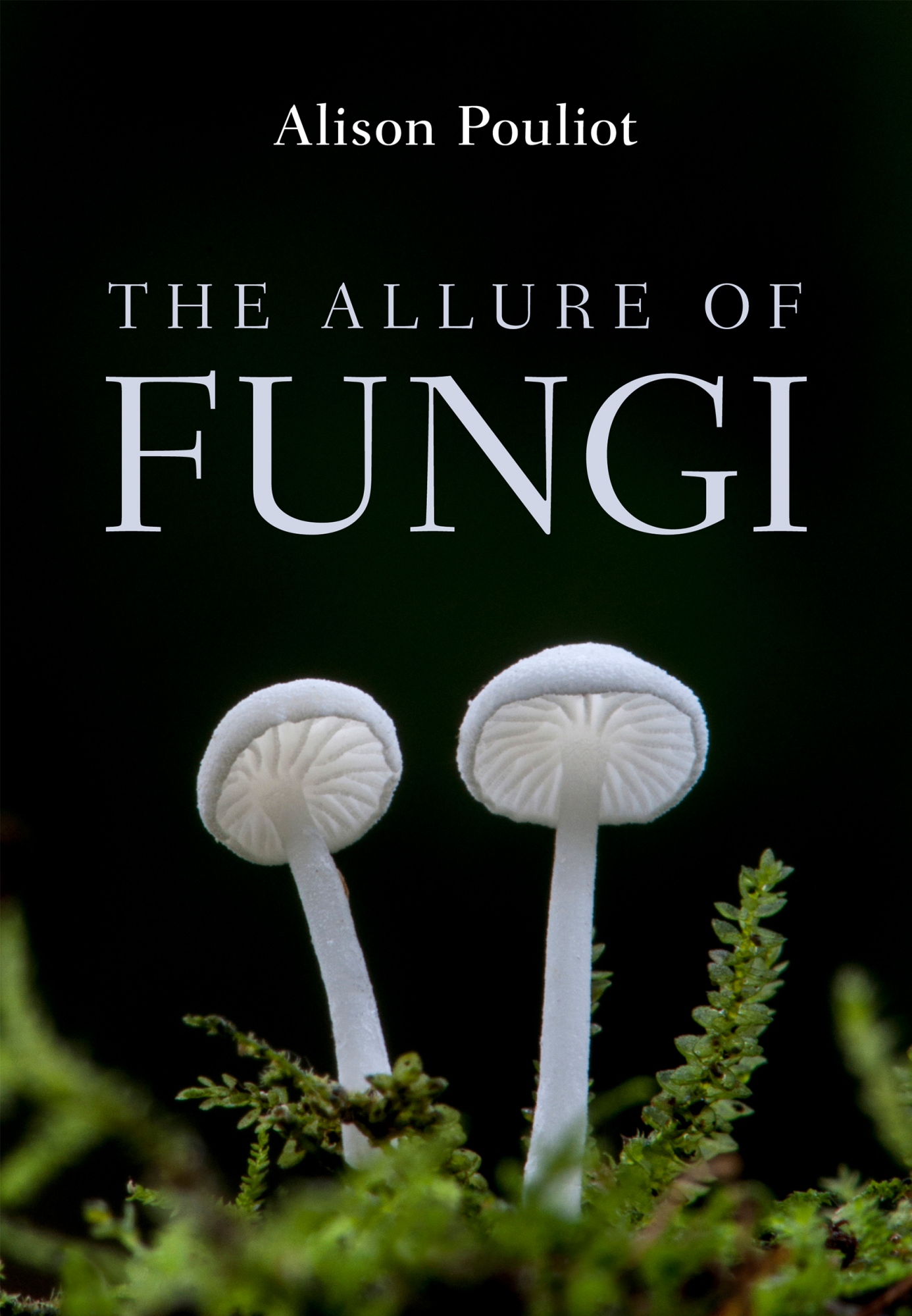 To be honest, my initial impression when I opened The Allure of Fungi was not favorable. As I often do, I looked first at the photographs and was disappointed by many of them (more about that below). Fortunately, I withheld judgment and, once I got into the text, found that it is quite a fine book and deserves a wide readership.

Dr. Alison Pouliot is a hemisphere-hopping Australian ecologist and photographer, with a keen interest in fungi, their activities, their relationships with people, and their conservation. Desiring to have fungi available to her year-round, she spends half her year in Australia and the other half in Europe to experience two peak fall seasons (at the expense of spring morel hunts, I wonder?). As a brief trip to her website will attest, she maintains a full schedule of activities, mostly aimed at drawing the general public’s attention to the importance of fungi. For example, in the two decades before writing the book, she led over 300 fungus forays, workshops, and seminars in Australia and Europe, attended by over 5000 people.

From the back cover: “The Allure of Fungi presents fungi through multiple perspectives — those of mycologists and ecologists, foragers and forayers, naturalists and farmers, aesthetes and artists, philosophers and Traditional Owners (“traditional owner” is an Australian term for a descendant of the tribe or ethnic group that occupied a particular region before European settlement). It explores how a history of entrenched fears and misconceptions about fungi has led to their near absence in Australian (not just there!) ecological consciousness and biodiversity conservation.”

The Prologue provides a synopsis of the reasons for, and background of, the book. “Between 2012 and 2016, I spent 1000 days in the forest to search for the answer to one question — why are fungi regarded so differently from other forms of life? … The answer to this question provides the possibility for fungi to be recognized as vital to functioning ecosystems and to be included in biodiversity conservation. However, it also offers something else — the opportunity to think differently not just about fungi, but the natural world more broadly … My 1000 days in the forest were spent with both fungi and the people who are drawn to them. The choice to conduct the research directly in the forest stems from my view that fungi, indeed all organisms, can only properly be understood through direct sensorial experience of them … This is an account of human-fungus relationships and how fungi are perceived and understood … While it has an Australian focus, it has been enriched by ideas gleaned across hemispheres and cultures.”

The book is well written and avoids jargon (although a few of the terms, such as “ute” [a utility vehicle, sort of a hybrid between a sedan and small pickup truck], might be unfamiliar to non-Aussies). It comprises nine chapters, with photo essays (typically comprising 9 or 11 full-page images) following each of the first eight: 1—An introduction to entangled worlds (Photo essay: The mycelial matrix); 2—Meeting mushrooms (Endless forms most bizarre); 3—Life in the subterrain (Fungal grub and fungal havens); 4—A stubbly burn skirmish (Biological umbrellas); 5—Wicked wild mushrooms – a morality tale (Recycling worlds); 6—Organising fungi (Undersides); 7—Knowing fungi otherwise (Collecting); 8—Foraging and foraying (Lichenised lives); 9—A call for fungal wisdom. A great deal of ground is covered — the importance of fungi as mycelial organisms that participate in many symbioses and often cloud the idea of what an “individual” is; the contrast between foragers (those who seek fungi for food) and forayers (those who seek fungi for science or other reasons besides food); the diversity of forms among mushrooms; where do fungi live and how does their usually underground habit influence the way we view them; why is “mushrooming” a verb of condescension; how have mushrooms been identified and categorized and how have these activities been perceived by non-scientists; and much more.

And now, about those photo essays. Clearly, Pouliot is an accomplished photographer and many of the images in the book and on her website are beautiful. But a large proportion are in a style that is not my cup of tea — close-ups in which nearly everything is “softened” (i.e., out of focus), with just a very shallow bit of the image sharp. I feel that, when trying to convey a sense of the natural world, especially to folks who might have only limited experience with it, it is better to let the inherent beauty make the impression, free from obvious human manipulation. Think the photography of Taylor Lockwood. But, as they say, variety is the spice of life, and no doubt there will be many who love the photos. Regardless of which camp you are in, the book is well worth reading for the text alone.

The science presented is sound overall, and the occasional misstatements are far fewer than I ordinarily find in the books I review — earthstars and puffballs, although similar in appearance, are not very closely related — the former are part of the Ramaria-Gomphus-stinkhorn group, whereas the latter are close kin with Agaricus and Lepiota s.l.; the explanations of “synonymy” and “homonymy” are reversed; and no way swallowing the tiny bit of mushroom, even a death cap, used for an identification “taste test” could be lethal (although I certainly don’t recommend people swallow even tiny bits of death caps).

Nearly 30 years ago, in an article titled “The Ties that Bind: Fungi in Ecosystems,” Jim Trappe and Dan Luoma stated “An understanding of the initiation, development, structure, and processes of ecosystems cannot approach reality if major participants are neglected. Such neglect has been the norm rather than the exception in regard to fungi …” Unfortunately, the same observation could be made today. Trappe and Luoma conclude with “Fungi profoundly affect nearly all ecological processes and events; to ignore or overlook the truth is to fail in the quest for a clearer understanding of ecosystems.” Hopefully, through the efforts of people like Pouliot, the message that mushrooms matter will start gaining wider appreciation. I heartily recommend The Allure of Fungi.