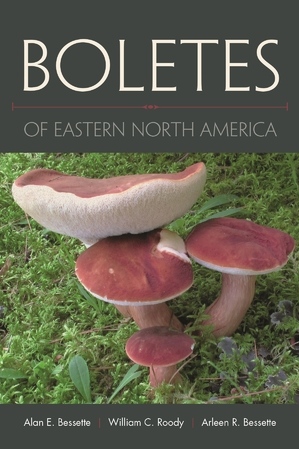 Boletes of Eastern North America (BENA) is basically a re-do of North American Boletes: A Color Guide to the Fleshy Pored Mushrooms (NAB), published in 2000 by the same authors and press, albeit with a much more limited geographic scope (those parts of the country west of roughly the Mississippi River are not mentioned, even when citing descriptions of transcontinental species), larger photos placed near the text descriptions rather than in segregated sections, slight changes in terminology, a small number of additional species, and lots of different names. And, unlike the earlier book, a less-expensive, but still way-overpriced, paper version is offered right away, rather than years later. Otherwise the approach, tone, and “feel” of the book are much the same as its predecessor.

Like most other Bessette books, this one tries to be “not too technical”—for example, cap, not pileus, stalk, not stipe, and no use of micro characters in keys and only brief mention in the descriptions. This puzzles me, as my sense is that the audience for narrow-focus books like this, as opposed to much of the audience for general field guides, comprises folks who are comfortable with the usual myco-jargon and realize that microscopes are necessary if one wants to identify most of the fungi they find.

The organization of the new book is virtually the same as that of NAB. The introductory sections address macroscopic features of boletes, how to approach identifying them, and how to use the book and keys. Much of the material is little-changed from that in NAB, although some parts of the latter have been deleted. As in NAB, appendices briefly explain the use of chemical color reactions and microscopic examination in the identification process, and tips for collecting, cooking, and preserving boletes. Newly added is a list of “common tree associates of eastern boletes,” which inexplicably includes many arbuscular mycorrhizal tree species with which boletes (the overwhelming majority of which are ectomycorrhizal) would not be expected to occur, except when those trees occur in mixed stands with ectomycorrhizal trees. A glossary, list of references and other resources, and two indexes—one to common names and one to scientific names— complete the book.

In between the intro and the appendices are the keys and descriptions of genera and species. Nine keys are presented, using the same categorization as in NAB (although with different names, primarily substituting “stalk” for “stipe”)—one for “ring stalks,” three for “net stalks” with different colors of pores, one each for “resin stalks” and “rough stalks,” and three for “smooth and miscellaneous stalks” with different colors of pores. The keys are dichotomous until one reaches the ends of some paths, where multiple similar species may be listed, along with brief descriptive comments to help the user choose among them. The leads use macroscopic characters, olfactory features, and habitat/tree associate information, and avoid microscopic characters. Although color changes upon application of KOH and other reagents are emphasized in many descriptions, they are not incorporated in the keys. Running a few species mentally through the keys suggested that they should work well enough for distinctive species, such as Suillus spraguei, but users are likely to have a more difficult time when dealing with groups such as the multitude of red-capped, yellow-pored species.

The first genus described, Alessioporus, is a harbinger of the many “new” names used throughout. A wave of splitting has led to many recent changes in bolete names. Some of the genus names and combinations now coming into use are new ones, while others have been around for some time, but not widely used. The fact that the authors chose to use these changed names strikes me as contrary to their approach of avoiding too-technical content. Using the old familiar names and indicating the changes in synonym lists, comments sections, or an appended table, would seem to have been a more consistent approach. The genus descriptions follow a standard pattern... “[Genus X] was erected in [year] to accommodate species formerly in [genera A, B, C]” followed by a listing (sometimes rather short) of key features that tie the species together, and ending with a statement that the genus is supported by molecular data. Unfortunately, the nature and quality of those molecular data are not discussed—there is wide variation in aspects such as how many DNA segments were sequenced, by whom, by how many different workers in how many studies, what taxa were included in the phylogenetic trees that were used to decide about genus limits, etc.—so readers have no way of knowing whether a particular genus really is well supported. Not all of them are. Given that most of these genus concepts are unfamiliar to many people, a key to the genera would have been very helpful.

The species descriptions include the scientific name with author, a list of selected synonyms, list of common names, an “overview,” macroscopic description of cap, pores and tubes, and stalk, habitat and season, distribution and frequency, spore print, microscopic features (almost always just the size and shape of the spores, as well as their color under the microscope [in what mounting medium?]), edibility, and lookalikes. Each is accompanied by a large, generally good- to excellent-quality, color photo, and some species feature more than one image. The photos precede each description, which is an improvement over the NAB arrangement in segregated image sections. Unfortunately, the designer never deviated from the “photos-first” layout while also trying to minimize white space, with the result that often the left-hand page contains the description of one species, while the photos on the facing page are confusingly of a different one whose description appears later.

In summary, for those who desire to attach names to the boletes they find in the East, the compilation of descriptions and large clear photos in BENA will provide a big help. Thus, if you don’t already have any bolete-specific resources, this would make a good addition to your library. However, typical of Syracuse University Press mushroom books, the price, even for the paper version, is not cheap ($69.95 for just under 500 pages—compare that with, for instance, Bill Roody’s Mushrooms of West Virginia and the Central Appalachians, 520 pages for $35; Tim Baroni’s Mushrooms of the Northeastern United States and Eastern Canada, 600 pages for $27.95; and Noah Siegel and Christian Schwarz’s Mushrooms of the Redwood Coast: A Comprehensive Guide to the Fungi of Coastal Northern California, 602 pages for $35). So should folks who already own NAB spring for the new book? By my count, 179 of the 192 species in this book are included in NAB, mostly with virtually identical descriptions, and often the same photo. As far as I can tell, none of the 13 “newcomers” are particularly widespread and common, and a few are decidedly uncommon, having been found only once or a few times at one or a few locations. So there’s not a whole lot of new meat. What the new book does offer is larger photos, many different photos, multiple photos of some species, and a lot of new names that may or may not become the norm. So let your pocketbook be your guide.

Now, for those who are not satisfied with just putting a name on a mushroom, but also want to understand the how’s and why’s behind the names and classification, a complaint: One of the back- cover promotional blurbs says BENA reflects “an authoritative knowledge of the subject.” But to me, it doesn’t. The authors have done a commendable job compiling information from the literature and photos from their personal collections and other contributors into an attractive and useful package, but there is virtually no “value added,” whereby, based on their knowledge and extensive experience, they present critical assessments of the information that is passed along.

We are warned to expect more departures from Boletus, but not told that the likely endpoint will be a genus that includes just B. edulis and the other members of the “edulis group,” such as B. rex-veris and B. rubriceps. No opinions are provided as to whether or not one should embrace the recently proposed genus names and combinations, many of which have been published online in Index Fungorum (IF). This online database provides an extremely valuable service, attempting to provide up-to-date names for all fungi. However, its e-publishing function unfortunately opens the door to poor science. As long as the procedural details of the International Code of Nomenclature for algae, fungi, and plants are followed, there are no obvious controls over what gets published. There is no requirement for any sort of peer review, inclusion of supporting evidence, or discussion of the rationale for the name(s) being proposed. Thus, those with authoritative knowledge of particular groups do us all a great service when they critically assess published name changes, and it would have been nice to see such assessments here.

In a few cases, clearly outdated names are used, contrary to the general approach of using the recent ones. Consider what is presented as Boletus paluster. This species was described in Boletus by Charles Peck in 1872, but he later decided the species did not belong there and, in 1889, transferred it to Boletinus. Over the years, other workers transferred it to other genera, including Boletinellus, Fuscoboletinus, and Suillus. In 1996, Annette Kretzer published molecular evidence (in a paper cited in BENA’s reference list) that what was then widely known as Fuscoboletinus paluster was better placed in Suillus (a conclusion supported by later analyses by others). The reason(s) for its inclusion in Boletus, and the absence from the synonyms list of the seemingly best current name (Suillus paluster (Peck) Kuntze), are not explained.

A major challenge in producing a North American mycoflora is determining whether the many European names we apply to our mushrooms are warranted— are our mushrooms the same as theirs, or are ours different ones that need their own names? Species that we have viewed as common and widespread, such as Boletus subtomentosus (better placed in Xerocomus) and Xerocomellus chrysenteron (≡ Boletus chrysenteron), are likely candidates for addition to the misapplied names list. Although such data as currently exist indicate that the mushrooms we have been calling “subtomentosus” and “chrysenteron” differ from the European species and that, therefore, it is possible, if not likely, that neither of these species actually occurs in North America, this possibility is not mentioned.

For many mushroomers, these sorts of concerns won’t matter. However, those folks who are serious about understanding the boletes and other fleshy fungi may well regret that this book doesn’t go the extra mile and provide critical commentary to help us along.