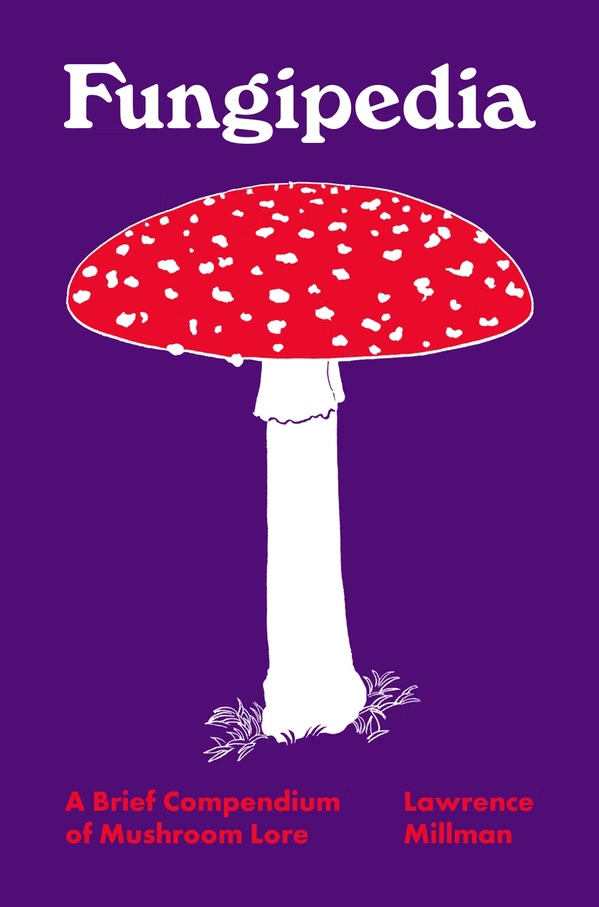 Fungipedia by mycologist Lawrence Millman is a diminutive 200-page hardcover book filled with an enormous treasure trove of fascinating facts and lore about the fungi kingdom and its impact on our planet and its inhabitants. While not exactly a mushroom identification field guide, at a mere 4.5 x 6.75 inches, it is the size of a book you wouldn’t mind carrying into the woods with you. It should appeal to beginning mushroom enthusiasts who may not be familiar or comfortable with scientific binomials, as well as more experienced folks interested in brushing up on essential mycological terms. The book is also entertaining and filled with amusing stories about mycologists, as well as some of humanity’s more curious beliefs regarding mushrooms through time. What mushroom enthusiast wouldn’t be drawn into learning more about mycology after reading beyond the humorous titles of entries like ‘beech aphid poop fungus’, ‘berserker mushroom’, ‘bird droppings’, ‘hair ice’, or ‘zombie ants?’ Organized alphabetically from A (Agarikon) to Z (Zygomycetes), Millman manages to cover 180 topics concisely with an admirable sprinkling of detail. Subjects of mycological interest to citizen scientists (a.k.a ‘amateurs’) include well-composed definitions of terms such as ‘anamorph’, ectomycorrhizal and endomycohrrizal fungi, endophytes, hyphae, and mycelium. Parts of fungi are described in clear but simple terms: gills, umbo, cystidia, latex, sclerotium, spores, stem, veil (annulus). All the basic concepts regarding nutritional and ecological functions of fungi such as parasitism, saprobic activities, mycorrhizal associations, brown, noble, soft and white rot are addressed. A few of the several fungi addressed in this compendium include bird’s nest fungi, the caterpillar fungus (Ophiocordyceps sinensis), chaga (Inonotus obliquus), corals, earth tongues (Geoglossum, Microglossum, Neolecta, and Trichoglossum spp.), ergot (Claviceps purpurea), jelly fungi, inky caps (Coprinus, Coprinellus, Coprinopsis sp.), lobster mushroom (Hypomyces lactifluorum), maitake (Grifola frondosa), matsutake, morels, puffballs, oysters (Pleurotus sp.), polypores, and shitake (Lentinula edodes). Common names of particular fungi provide the ethnomycologist with an opportunity to expand on the meaning of and folk lore behind big laughing gym (Gymnopilus junonius), the nitrogen-feeding ‘cemetery mushrooms’ (Hebeloma syrjense and Hebeloma vinsophyllum), corn smut (Ustilago maydis), cramp balls (Daldinia spp.), dead man’s fingers (Xylaria spp.), fairy rings, king Tut’s curse, morel mushroom ‘penises’, magic mushrooms containing psilocybin, the stinkhorn (Phallus impudicus), the train wrecker (Neolentinus lepideus) and witches brooms. Among the twenty-four people honored by inclusion are musician-mycologist John Cage, African American mycologist George Washington Carver, mushroom ‘Guru’ Sam Ristich, the Mexican shamaness Maria Sabina, Otzi, the five-thousand-year mummified Tyrolean body discovered in the Alps, and Renaissance mycologist Paul Stamets. Characters from literature, legend and fantasy include the hookah-smoking caterpillar who sits on a mushroom in Alice in Wonderland, Puck, the sprite of Shakespeare’s play A Midsummer Night’s Dream, and, of course, Santa Claus. Diseases caused by fungi and or fungi-cultivating, eating or transmitting insects include white nose syndrome of bats infected by the ascomycete Pseudogymnoacus destructans, valley fever caused by Coccidioides immitis, the tree-girdling canker Chestnut ‘Blight’ caused by Cryphonectria parasitica, and Dutch Elm Disease caused by fungal spores carried by an Asian bark beetle.

The black and white illustrations by Amy Jean Porter are a perfect accompaniment to the informative and lively text. Fungipedia can be read in less than two hours and will prove useful to all. It would make a great stocking stuffer or gift for anyone with whom you may want to share your passion for fungi. Gary Lincoff’s Audubon Guide to the Mushrooms of North America has frequently been referred to as the ‘Mushroom Bible.’ Fungipedia in my view qualifies as a succinct companion to any good modern field guide. I highly recommend you get a copy to inspire you and lift your spirits during this crazy time of COVID-19 quarantining. It can be purchased on Amazon for just $12.89 or for $10.99 for Kindle readers.