Mushrooms and Macrofungi of Ohio and the Midwestern States: A Resource Handbook 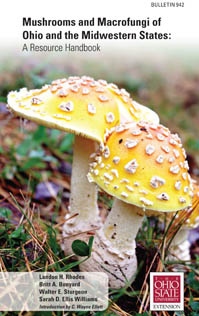 This small handbook from OSU Extension represents another in the growing lineup of state or narrow regional mushroom guidebooks. Page-size is roughly 4.5 x 7 inches and the book would fit in a large coat or pants pocket. Although there is no mention of a specific purpose or audience for the book, one of the authors indicated to me that it is intended primarily for beginning mushroom hunters.

The book begins with brief Introduction and Terminology sections (6 pages in total, not illustrated) that address which mushrooms are safe to eat, often-heard edibility rules of thumb, collecting wild mushrooms, and the parts of a typical mushroom, and end with a glossary of a small handful of other terms. The Identification section comprises the bulk of the book and presents the species treatments (149 pages). One page of References and Resources — a list of seven books, magazines, and websites — and the Index, which includes common names and scientific names by genus, finish things off.

The identification section is divided into color-coded subsections, using an unconventional breakdown that mixes a family name (Tricholomataceae), genus names (e.g., Amanita, Lepiota), morphologic types (e.g., boletes, chanterelles), and common names (e.g., inky caps, carbon fungi), along with "miscellaneous mushrooms." The morphologic types are neither described nor illustrated and the family and genus names will be effective only for users who already are familiar with them. There are no keys or other identification aids other than the organization scheme, and no indication as to how the authors intend the book to be used (picture-matching presumably).

Species are presented mostly one per page, although in some cases two or more species, or even a larger group, are covered. Each treatment includes the color-coded section name in the upper outer corner and a matching colored area around the page number, a common name in large font (the main heading) and scientific name in a smaller font, a commentary paragraph, other scientific and/or common names, and a photograph, sometimes accompanied by a smaller inset photo. Most of the common names have been taken from previous books such as the Audubon guide. As is always the case when trying to use common names for everything, some of them are not in common usage, such as rounded earthstar (Geastrum saccatum), stalked hairy fairy cup (Dasyscyphus virgineus, now usually placed in the genus Lachnum), and ash lover (Perenniporia fraxinophila). Most of the scientific names are up to date and usually the prior name is given when it might be more familiar to readers. The commentaries are very brief and vary in the information presented. Typically they might include some descriptive information, interesting tidbits of general information, mention of similar species, and/or whether the species is edible or not in cases of good edibles and toxic species. In very few cases, however, does a commentary provide sufficient information to support a confident identification.

The main photographs occupy the lower ½ to ? of the page. In some cases, tiny inset photos are superimposed on the main image. Some of these are helpful but many are too small to present the subject clearly. Occasionally, the featured species is presented in the inset and a different species is shown in the large photo, which I found confusing. It appears that most of the original photos were good ones — although some of them appear to have been selected for their artistic appeal rather than their usefulness for identification purposes — however the designer “zoomed in” on the subjects and then applied a vignette filter that makes many of the images cloudy. This reduces both their attractiveness and usefulness and also removes surrounding habitat elements that could provide scale (few of the commentaries include any specific size information). Thus, for instance, someone unfamiliar with puffballs who scanned the photos of Lycoperdon echinatum and Calvatia gigantea, which appear on facing pages, would not realize that the diameter of the latter can be 10 or more times that of the former (although the text does provide information about the relative sizes).

It appears that writing of the commentaries was divided among the authors and that not a lot of editing was done to provide consistency among them. For instance, in the Puffballs section, reference is made to earthballs (the usual common name for species of Scleroderma) and the fact that many of them, unlike puffballs, are inedible or toxic. However, the common names used for Scleroderma citrinum and S. polyrhizum are pigskin poison puffball and earthstar scleroderma, respectively. "Earthball" is only mentioned under Other Common Names.

The roughly 150 species treated in the book (a smut, ergot, and four slime molds are among them) are mostly ones that appear in many other guides. Only 10 to 15 are ones not often found elsewhere. Polypores are accorded special attention (32 species), probably because the three OSU authors are plant pathologists.

So, would this be a good book for a beginning mushroom hunter? I think not — at least not by itself. The combination of sparse un-illustrated introductory material, lack of a glossary other than definitions of a small handful of terms, the very brief descriptive information, and the zoomed-in photos would make it hard for a beginner to reach accurate identifications. More experienced users might find it easier to work with but, given that most of the species are included in other books that many mushroom hunters would already own, it is uncertain how much this book would increase their ability to make identifications. On the other hand, book collecting is for most of us a necessary adjunct to mushroom collecting and the information that is presented is sound so this volume could serve as a handy adjunct for those who have a basic library of more comprehensive guides and cash to burn. However, with a $26.95 price tag, the book offers relatively little bang for the buck — there are many comparably priced guides out there that contain two or three times as many species along with more extensive information — so those who have to watch their budget closely might not want to put this one at the top of their wish list.