Mushrooms of the Gulf Coast States:
A Field Guide to Texas, Louisiana, Mississippi, Alabama and Florida 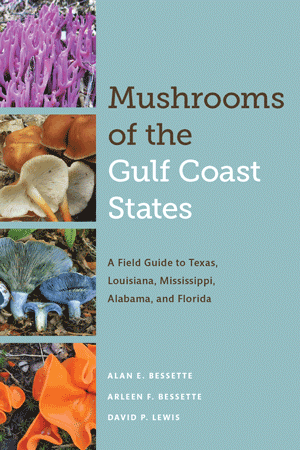 “Mushrooms of the Gulf Coast States,” a beautifully bound and imperviously jacketed gem of a field guide by veteran myco-authors Alan and Arleen Bessette and myco-colleague David Lewis, in his first book, fills a huge gap in our understanding of the mycota of this diverse and interesting region. The book covers a wide variety of fungal habitats, and is focused primarily on the states of Texas, Louisiana, Mississippi, Alabama and Florida, with some overlap to the Atlantic Coast Plain and North Central and Northeast Mexico.

This guide contains descriptions of more than a thousand fungal species, both commonplace and rare, 667 photos, including large format species illustrations, and lots of helpful identifying details, both macro and micro. Remarks accompanying descriptions include potential lookalikes and interesting or unusual features. Both edibility and toxicity are briefly discussed, when known, and are subject to the usual author biases.

After introductory chapters on general mycology, collecting practices and methods of identifying fungi, the authors go right to the meat of the matter: species descriptions and photographs. In addition to the authors’ own photos, many fine Southeastern photographers also contributed to this work. A number of species were illustrated for the first time in any field guide.

The Bessettes brought their breadth of knowledge to play in extensive sections on Lactarius and allies and the many new genera found in the Boletales: from Alessioporus to Xerocomus. A particularly interesting Xerocomus sp., provisionally named X. sclerotiorum by the Bessettes, is an edible bolete that forms sclerotia!

David Lewis has extensive mycological field experience in the Gulf Coast states, in part showcased within this book by many unique and beautiful examples of Amanita, as well as Cantharellus. Check out his photo of the amazing Amanita westii, with its chocolate brown gills! This species was first found in Florida in 1945, and only recently rediscovered in Eastern Texas.

Extensive research and DNA sampling has resulted in an expansion of our understanding of North American chanterelles. Several unique chanterelle species of the Gulf Coast region are published here in a field guide for the very first time, including David’s namesake chanterelle, Cantharellus lewisii!

Various keys are provided to help readers put names to mushroom finds. A simple pictorial key, which is grouped into easy macro-morph categories like polypores, gilled mushrooms, crusts, boletes, chanterelles, cup fungi and the like, prefaces the species descriptions. Large species diverse groups like gilled mushrooms and boletes and polypores have their own dichotomous keys. The Gilled Mushroom key starts with spore color questions; yes, Virginia, spore prints are still important, especially for those first starting out in their mushroom identifications.

Within these larger groupings, species are listed alphabetically. This may be a mite confusing to those who have missed the many new genera proposed for species formerly lumped in the genus Lactarius and Boletus, but progress is both inevitable and sometimes even painful, at least to those who must now forget an old name and remember a new one! Sequencing has served to help tease out cryptic species and correct outright generic misplacements in many groups of fungi. It’s a brave new fungal world.

A handful of species in this book were designated as range restricted. It was unclear to me if most species occurred across all of the Gulf Coast states. I would have appreciated a listing of states in which each species had been found. Habitats were listed for all, so perhaps the authors wanted us to keep an eye out for these species whenever in appropriate habitat, regardless of states where it might already be known to occur?

The one flaw that I found in this book amongst many other praiseworthy elements was the inappropriate use of three unpublished Amanita names: amerimuscaria, amerifulva and amerivirosa. Although we are well aware that the European forms of muscaria, fulva and virosa do not occur in North America, at the very least the delimiting term “nom. prov.” should have been appended to those provisional names.

Although this field guide is neither lightweight in heft nor scope, next time I fly to the Gulf Coast, I will be making room in my already overstuffed luggage for this 3+ pound volume. Residents and visitors alike should rejoice in this beautifully researched, attractively produced and long overdue fungal field guide to a fascinating and formerly under-served region of our country.