Mushrooms of the Northwest: A Simple Guide to Common Mushrooms 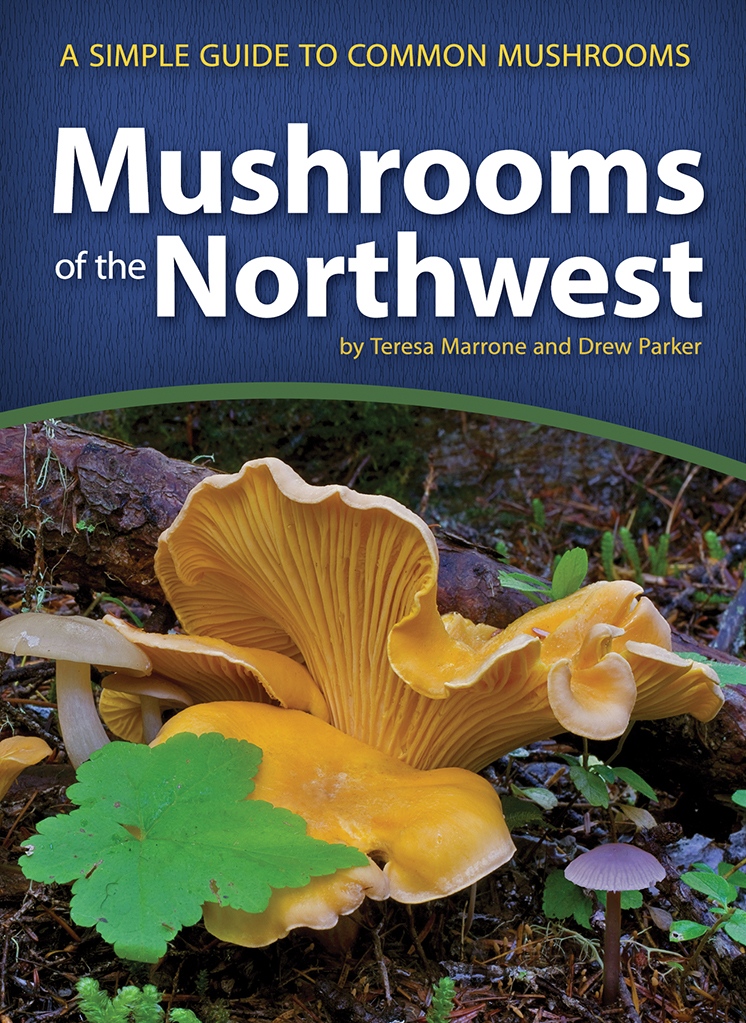 This is a small (roughly 4.5 × 6 inches) guide that, as the title states, deals with mushrooms commonly encountered in the Northwest (rather narrowly defined as Washington, Oregon, and Idaho). It “was written with the beginning mushroom enthusiast in mind.” The publisher’s notes suggest that over 400 species are covered but that number must include pretty much every species mentioned anywhere, as the number of well described and illustrated species is much smaller (I get about 150, although an exact count is difficult because of the number of species groups utilized [roughly one-third of the 150]). Approximately 200 additional species are illustrated but with only a few words of descriptive text. All the species also occur outside the subject area and almost all of them are covered in other books. If this sounds familiar, it should. This new guide from Adventure Publications is nearly identical (quite a lot of the text in fact is identical) to the earlier Mushrooms of the Upper Midwest: A Simple Guide to Common Mushrooms by Teresa Marrone and Kathy Yerich (reviewed in the Jan-Feb 2015 Mycophile) and Mushrooms of the Northeast: A Simple Guide to Common Mushrooms by Teresa Marrone and Walt Sturgeon (reviewed in the Nov-Dec 2016 Mycophile). A pattern is developing here — are southeast and California books in the works?

In addition to the two previous mushroom guides, Teresa Marrone has written a number of outdoor-themed books as well as cookbooks featuring wild foods. She lives in Minneapolis and is not known to be part of the Pacific Northwest mushroom scene. In fact it is not clear whether she has any direct experience with our fungi. For that, she made the wise choice of enlisting Drew Parker, from northeasternmost Washington, at the very fringe of the three-state area. Drew is a member of the Pacific Northwest Key Council, has conducted several surveys of mushrooms on national forest lands, and is well known in this region as an identifier and photographer. He contributed the bulk of the photographs to the project, along with a large number of other photographers, apparently identified through their internet postings on Mushroom Observer and other sites.

The introductory material is brief, comprising only about 20 pages. It includes the rationale behind the book, an explanation of what mushrooms are and how to look at them, cautions for eating them, a bit of basic fungus biology, and a couple pages on the region’s terrain and climate (new to this book). This is followed by an explanation of how best to use the book, a description of the ten morphological groups (cap and stem with gills, cap and stem with pores, coral and club fungi, etc.) used to organize the Mushrooms Grouped by Type section of the book, and the species accounts. A list of books and websites, glossary, and index follow the species treatments.

The species accounts occupy 246 pages, broken down into three main sections—Top Edibles, Top Toxics, and Mushrooms Grouped by Type. Other than the description of the morphological types, there are no keys or other identification aids. The reader is directed to look for picture matches, starting with the morphological groups. Unfortunately, separating out the main edible and poisonous species makes the user have to look in three different sections of the book before deciding whether (s)he has found a match for the mushrooms in hand. Within the morphological groups, the species are organized by color (quite useful for wildflowers but not so useful for the legions of brown mushrooms), proceeding from light to dark, which leads to juxtapositions of very unlike things such as Agaricus augustus (the prince) followed by Marasmius oreades (the fairy ring mushroom) and a Phaeocollybia kauffmanii group (erroneously given the common name “dark-rooting collybia group” [they aren’t collybias]), and species of Suillus appearing in four different places. Such things are confusing for someone with a bit of experience and make it hard for a beginner to begin developing a feel for the Friesian genera that form the basic framework for learning mushroom identification.

The “species” accounts include a number of groups, such as morels, toxic boletes, and earthstars, in addition to descriptions of single species. The content of the entries varies. The headings are all common names, with the scientific names in a much smaller font beneath them. Information categories include Habitat, Description, Spore Print, Season, Other Names, Compare, and Notes although, for many species, not all are included. The page edges are color-coded to facilitate finding the edibles (green), toxics (red), and morphotype (ten different colors) sections. The pages also include several icons for those same groupings, plus habitat and fruiting season. I didn’t find the icons useful as they merely repeat information in the descriptions and also include adjacent tiny-font text explaining their meanings. The more important features of each fungus are highlighted in the text through use of a colored boldface font.

The photographs vary in size from a whole page down to roughly one-eighth of a page, and having a mix of sizes on one page sometimes makes it difficult to judge the relative sizes of the different mushrooms shown. The images are of uneven quality, although most are good and, at least the larger ones, show the key features well. Some are excellent, but others are underexposed, lack sharp focus, have inaccurate color cast, or fail to show necessary identification features.

As was the case with the first two books, the authors emphasize the value of scientific names and the limitations of common names, but then use common names, rather than scientific ones, in the main headings, photo captions, and text.

The information presented generally is accurate. However, there are a few glitches. Using the scientific names to refer to mushrooms is not “taxonomy.” A rather high percentage of the glossary definitions are either incorrect (e.g., “mycology” [it is the study of fungi, not the study of mushrooms], “volva,” and “white rot”), not helpful (we’re told that a “fungus” is a member of Kingdom Fungi, but nothing about what actually makes a fungus a fungus), or not very clear (e.g., those for “genus” and “kingdom”). Including “inky caps” as a group in the Top Edibles section is misleading. Although probably all of them could be eaten by most people with no ill effects, the overwhelming majority are too small to be of any culinary interest. Only Coprinus comatus (shaggy mane), Coprin(ell)us micaceus (mica cap), and perhaps Coprinus/Coprinopsis atramentarius/-a (alcohol inky, which is toxic when interacting with alcohol in one’s system) can be considered common edibles in the group. Morels are considered a top edible and verpas are categorized as inedible, despite the two groups being very similar edibility-wise. For nearly everyone, both need to be cooked well and, even then, some people cannot tolerate them.

Nevertheless, like its predecessors, this is not a bad little book. It isn’t very expensive and using it might help a beginner decide whether mushrooms are something worth learning more about. However, I remain skeptical about how well it will help people start learning to identify mushrooms. I fear that not grouping the species by the traditional Friesian genera will prevent newcomers from beginning to develop a feel for what, for example, an amanita, russula, or cortinarius is, and that is an essential first step in becoming skilled at mushroom identification. As for mushroomers with some experience (remembering that this is not the book’s target audience), nearly all the species can be found in many other field guides, so adding this to an existing library would probably not increase one’s ability to identify many things. However, if your library is still small, this could be a handy addition.