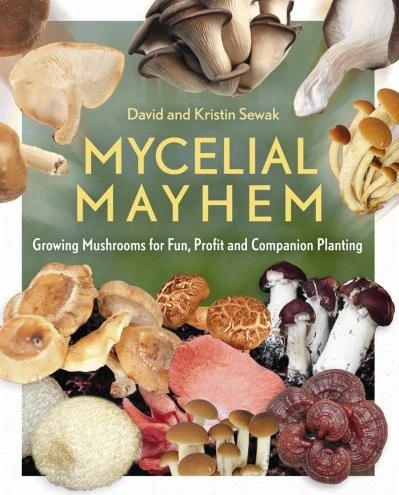 Mushrooms, wild and otherwise, continue to increase in popularity, whether it be foraging for wild species (while being chauffeured in a Cadillac Escalade and served gourmet pastries in a recent Sunset magazine article), using them to dye natural fabrics, or cultivating them at home. Not surprisingly,this increased interest has led to publication of a number of books focused on mushrooms. Mycelial Mayhem is a recent addition to the cultivation books field, with an emphasis on growing for sale.

At their Pennsylvania farm (Berglorbeer Farma), which features prominently in the book, the Sewaks grew mushrooms and vegetables for their family‘s use and for sale to restaurants and at venues such as farmers‘markets. They also made mushroom grow kits and logs, taught classes about mushroom growing, and collected wild mushrooms from the surrounding forest for home use and sale. They subsequently have relocated to Montana.

The book‘s front matter is brief, consisting of Acknowledgments, Foreword, and an introduction that explains the book‘s title and relates how Dave and Kristin arrived at their mushroom-focused way of life by separate paths. The main part of the book is organized in four sections. Section I (Mycelia): Why mushrooms? Mushroom basics. Section II (The Stem): Growing mushrooms; Wild collecting and purveying; Companion planting and other sustainable methods. Section III (The fruit of your labor): Umami of edible mushrooms; Nutritional benefits of mushrooms; Niche business or supplemental income; Marketing mushrooms. Section IV (Spreading the spores): Conclusion: spread your spores. The text is augmented with numerous black-and-white photos and occasional line drawings. Additional attractive color photos are grouped together in a separate section. The back matter is fairly extensive, with nearly 20 pages of examples of marketing and communications materials from the Sewaks‘ own business, a lengthy list of published and online resources sorted by subject, chapter-by-chapter references cited, and an index.

The text presents a wide range of material based on the Sewaks‘ experience and, as such, comes across as they know what they are talking about when they explain how they built the farm and made things work in their business, augmented with personal anecdotes. Those are the strongest parts of the book. They have what might be called a back to the Earth philosophy and talk a lot about sustainability, resilience, and permaculture.Some readers might find the presentation of these topics too romanticized and have a problem with claims such as mankind has utilized mushrooms since the dawn of humanity, mushrooms alkalize the human body,mushrooms make all of your veggies better tasting and more nutritious, and mushrooms have the potential to restore landscapes by soaking up pollutants. No explanation of, or basis for, these statements is provided.Similarly, a long list of medicinal benefits of mushrooms is described without acknowledging that there is still much legitimate debate over whether or not and which of these benefits are real. Unfortunately, they refer to those who don‘t accept their beliefs as naysayers.

Good detailed descriptions of cultivation methods that they found successful for production of commercial quantities are given for oyster mushrooms, shiitake, and king stropharia, the latter as a companion planting in their garden. However, only one chapter of the book is devoted to actually growing mushrooms and it does not provide much of a general introduction to cultivation practices, so a neophyte cultivator would have to go elsewhere for that information. For someone trying to emulate their business, there is a lot of very useful information about starting and running such a venture, particularly their marketing suggestions and advice for preparing to sell at farmers‘ markets and similar venues.

In summary, Mycelial Mayhem provides a lot of good advice for folks who want to pattern their lives after those of the Sewaks and have a sufficiently large property, complete with abundant hardwood and conifer trees, located in an area that provides a market for sale of the mushrooms produced. However, it will be less helpful for those who are getting started with mushroom cultivation and want to operate for personal use on a smaller scale in an urban or suburban environment. These folks probably will find the how-to information in Stephen Russell‘s The Essential Guide to Cultivating Mushrooms (reviewed in the March-April 2016 issue of The Mycophile) or Tradd Cotter‘s Organic Mushroom Farming and Mycoremediation (reviewed in the Winter 2014 issue of FUNGImagazine) more suited to their purposes.