Polypores of the Mediterranean Region 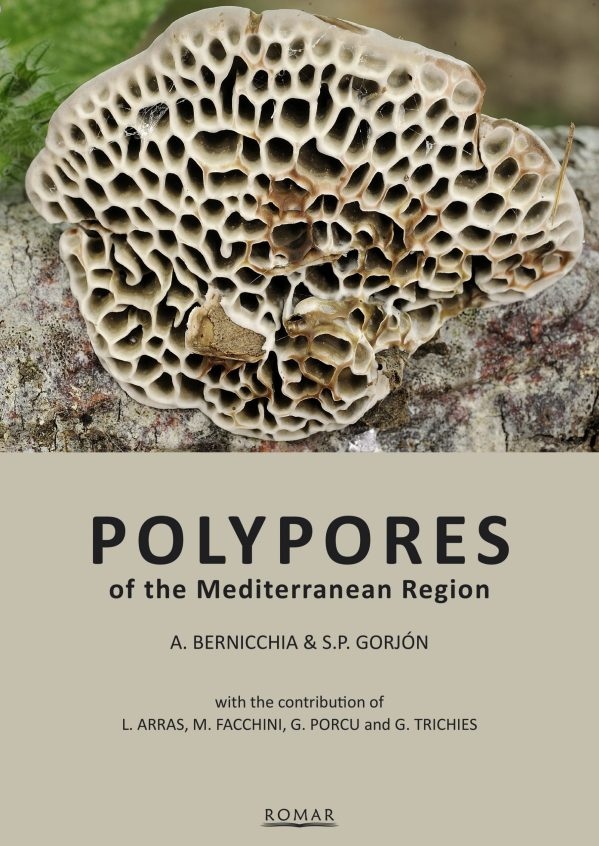 Seeing as how most polypores are too tough to eat, the group tends to get little respect from mushroom hunters in North America and, hence, little representation in our field guides. However, that toughness means they are generally persistent and so can be found even when their fleshier, more palatable relatives are scarce. They are ecologically important and some of them actually can be called “pretty,” so they are deserving of more attention than they usually receive. Although this recent book is focused on the Mediterranean region, it is more worthy of consideration by North Americans than you might think.

Annarosa Bernicchia’s name might be familiar as she is the first author of Polyporaceae s.l., the 10th volume of Fungi Europaei, published in 2005. Since then, there have been many changes in the world of polypores—many new species have been described and revised classifications have been proposed with their attendant name changes, mostly as a result of phylogenetic analyses utilizing DNA sequence data. While acknowledging the importance of the molecular approach, Bernicchia and Gorjón chose to emphasize the ecological and morphological aspects of this heterogeneous (including representatives from at least 11 orders, from Agaricales to Tremellales) group of fungi. In their words, “There are several ways to attribute a taxonomic name to an unknown specimen, and all of them are equally valid. We can take a small sample from a herbarium, crush it and, after various methods, obtain its entire or partial DNA sequence, and with the aid of computer programs we will probably get a name in the end. We can also go to the field, study the ecology, collect samples and with the help of a microscope identify some features that help us to give a correct name. This book fundamentally deals with this second option and we hope that with the descriptions, photographs, and keys, the reader will be able to identify those polypores found in the field.” Another goal of the authors is to highlight the importance of these fungi in forest conservation, with a focus on key and vulnerable species.

The "General Characteristics" section provides descriptions of the features that one needs to understand in order to work with the group, including three pages of line drawings of micro features. Together with the "Summary Table," which includes the general fruitbody shape, nature of the pore, or sometimes gill surface, hyphal system, basidia, spores, type of rot (brown or white), and other features), it provides a good introduction, useful wherever in the world you might be.

Altogether,116 genera and 435 species are covered, arranged in alphabetical order. Each genus is described, followed by comments about its taxonomic relationships and other aspects, and then a key to its species, sometimes including species in closely related genera. Each species account includes a description of macro and micro features, habitat and distribution information, and remarks, mostly dealing with related or similar-looking species and with taxonomic issues created by the emergence of DNA sequence data. Except for some of the rarer species, the text is supported by good to excellent macro and micro photographs, the latter showing hypha types, basidia, spores, and cystidia. The most common synonyms are given.

Polypores of the Mediterranean Region is informative, well-produced, attractively presented, and reasonably priced given its size. But can it be of use for those of us who live outside the Mediterranean area? I think yes. I live in the Pacific Northwest (PNW), where we are lucky to have the software resource, MycoMatch (a.k.a. MatchMaker), which provides descriptions of several thousand macrofungi from our region, photographs of many of them, a synoptic-key-style interface for identification, and a host of other features. It includes 263 polypore taxa for our region and so I compared the list of 116 Mediterranean genera with the PNW genera represented in MycoMatch. Seventy-three of the 116 are included in MycoMatch, among them all of the larger and more common genera.

Of the 43 non-represented genera, 31 contain only a single species (in the Mediterranean area, at least) and four is the greatest number of species in any of them. Comparing species would be more problematic but the main point is that this book would be very helpful for developing an understanding of the main polypore genera, most of which occur throughout North America as well as in the Mediterranean region.

The importance of microscopic features for identifying polypores will no doubt limit the number of mushroom hunters willing to tackle that task. But, for those who are, this would be a useful resource.