There are many mushroom supplements on the market claiming a variety of health benefits, and it is difficult to discern which of these claims are backed by reliable research. Most of the existing research is conducted using either human cells or animal models rather than human participants. Without being tested directly on humans, this research has limited application. A review of the literature reveals a relatively small number of studies have been conducted using human patients and those that do exist vary widely in study design and quality.
This article brings together all the existing studies that involve human participants for three popular mushroom species that are commonly consumed as dietary supplements. The three species reviewed are Agaricus blazei or royal sun agaric, Inonotus obliquus or chaga, and Ganoderma lucidum or reishi. Each study described includes the study’s design, the condition being treated, the preparation, dosage, and duration of treatment, the number of subjects, and a summary of the results.
The outcome of these studies is variable and caution is recommended when extrapolating the results. Many factors — such as poor study design, small sample sizes, lack of replication, mushroom variability, and problematic statistical methods — make it difficult to rely on the results of any individual study. Further research using well-designed clinical trials is needed to establish medicinal benefits for these three mushroom species.

Mushrooms have long been used as medicine in cultures throughout the world. In recent years many species have become popular dietary supplements to promote health. For some mushrooms, a great deal of research on potential health benefits has been conducted, while for others there is very little scientific support. In spite of this, countless mushroom supplements are available on the market with preparations, doses, and health claims that vary widely between manufacturers.
It is difficult to determine if the consumption of various mushroom supplements provides health benefits. Supplement companies often cite specific research to support their claims, but most of this has been conducted in vitro or using animal models, usually mice and rats. While this information can suggest possible value, there are differences in biochemical, physiological, and anatomical characteristics between animal models and humans. Caution is needed when extrapolating the results of this research to supplements prepared for human use. The number of studies of human subjects published in peer-reviewed literature is relatively small and variable (Leonard 2015).
This review draws together all of the human clinical trials found in the peer-reviewed literature for three popular mushroom supplements. Each of these three mushrooms species is consumed for medicinal purposes, is widely obtainable, and is sold in dietary supplement form by multiple companies.
While the included trials provide a succinct view of the research that has been conducted thus far, they do not indicate the reliability of the research. Many factors — such as study design, small sample sizes, lack of replication, mushroom variability, problematic statistical methods, and others — make it difficult to rely on the outcomes of the research. This paper is not designed to evaluate each individual study or to substantiate or refute the claims of any mushroom supplement companies, but rather to provide a view of the available research that has been conducted on human subjects.

In this review, all the available human studies, including clinical, epidemiological, and case studies were assessed. All of the studies were found by searching the mushroom’s genus and species in Web of Science (1945–April 2015), BIOSIS (1980–April 2015), MEDLINE (up to April 2015), and clinicaltrials.gov (up to April 2015). Human studies referenced in review articles found after 2005 were also considered. Included studies were limited to those published in peer-reviewed journals and which involved at least ten subjects. Peer-review status was determined using Ulrichsweb (2015). The validity of the included publications was also assessed using Beall’s List of Predatory Open Access Publishers (2015).
Studies where the intervention consisted of multiple ingredients, such as a combination of herbs and mushrooms rather than a single mushroom species, were excluded. No restrictions were placed on date, language, or study design. Where the article could not be read in its original form, the information was taken from a translation, a review article, or from the article abstract. When applicable, this is noted within the respective tables.
Many of the claims made by supplement companies and included in this review are not medical terms and are taken directly from product labels or websites (Swanson Superior Herbs 2015; Myriad Mycology 2015; Mushroom Wisdom 2015; Terrasoul 2015).
The information provided for each of the three species includes a description of the mushroom, its native range, some of its uses in folk medicine, claims from supplement companies, a brief summary of in vitro and in vivo animal research, and a table outlining the existing human studies. Each table includes the available information on study design, preparation, dosage, subjects, duration, and a summary of the results.

Agaricus blazei (A. subrufescens, A. sylvaticus, A. rufotegulis or A. brasiliensis) 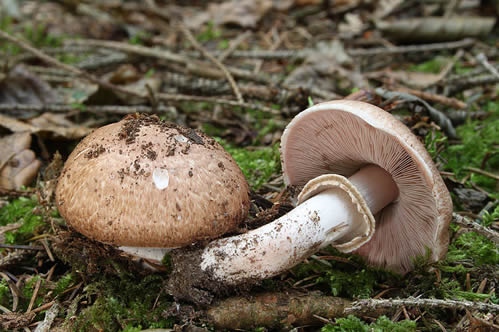 Agaricus blazei is commonly consumed for medicinal purposes in both Brazil and Japan (Xu, Beelman, and Lambert 2012). Its flavor is characterized by an almond fragrance and a sweet taste. It is closely related to the white button mushroom, Agaricus bisporus, regularly eaten in the United States (Kerrigan 2005). In the wild, A. blazei is somewhat rare but has a wide distribution, growing throughout much the world. It has been assigned several scientific names in different regions — A. subrufescens, A. sylvaticus, A. rufotegulis, or A. brasiliensis — but all are now considered the same species (Kerrigan 2005).
In Brazil, A. blazei has historically been used to fight physical and emotional stress, to stimulate the immune system, and to prevent or treat a variety of medical conditions such as diabetes, high cholesterol, osteoporosis, peptic ulcers, digestive problems, and cancer (Firenzuoli, Gori, & Lombardo 2008). Today, supplement companies advertise the benefits of A. blazei with claims that it “shows promise as anti-cancer and anti-tumor medicine” and provides “cellular-level immune system support” (Myriad Mycology “blazei”; Swanson Superior Herbs “blazei”).
A. blazei is one of the more commonly researched medicinal mushrooms. A large number of in vitro studies have demonstrated a variety of effects including antitumor, antiviral, anti-inflammatory, antidiabetic, and anti-allergic properties (Wang, Fu, & Han 2013). In vivo animal research has displayed its ability to improve the efficacy of hepatitis B vaccines, stimulate immune response to leukemia, and promote T cell proliferation (Wang, Fu, & Han 2013). A. blazei contains several immunostimulatory compounds such as β-1, 3-D-glucans, glucomannan, and proteoglycans (El Enshasy & Hatti-Kaul 2013).
Like the other mushrooms in this review, relatively few human studies for A. blazei have been documented in peer-reviewed journals. Table 1 lists those that meet the requirements for this review, 11 studies in all. In addition to those in Table 1, five clinical trials can be found on clinicaltrials.gov. The earliest began in 2005 and the latest in 2011. These trials tested the effects of A. blazei on patients with hepatitis C, multiple myeloma, inflammatory bowel disease, and type 2 diabetes mellitus. The results of two of the five trials can be found in Table 1 (Tangen et al. 2015; Hsu et al. 2007). The results of two were not located in the literature search, and the fifth trial exploring the effect of A. blazei treatment on inflammatory bowel disease is listed as currently recruiting patients (clinicaltrials.gov 2015). 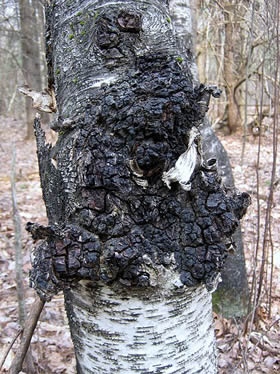 Inonotus obliquus is a polypore mushroom that grows as a plant pathogen on the trunk of birch trees in northern latitudes throughout the world (El Enshasy & Hatti-Kaul 2013). According to systematic classification methods, I. obliquus is also known as birch fungus, Fungus betulinus. I. obliquus can only be collected from living or freshly cut, mature birch trees. On dry standing or fallen trees, the mushroom dies, and the content of active compounds decreases dramatically (Shashkina, Shashkin, & Sergeev 2006).
The Tartars of West Siberia traditionally used I. obliquus to treat “tuberculosis, gastrosia, liver diseases, heart diseases, and ascariasis” (Zhong et al. 2013). It is currently used to treat various disorders including gastrointestinal cancer, as well as cardiovascular disease and diabetes in Russia, Poland, and most of the Baltic countries (Zhong et al. 2013). Supplement companies that sell I. obliquus in the United States claim that it has demonstrated “a variety of beneficial cardiovascular actions and immune supporting benefits” and that it is “currently being used in numerous cancer studies” and “being studied for its ability to treat the virus HIV” (Mushroom Wisdom “chaga”; Myriad Mycology “chaga”).
I. obliquus has a high content of compounds such as β-glucans that may affect the immune system, (El Enshasy & Hatti-Kaul 2013) and secondary metabolites, including phenolic compounds, melanins, and lanostane-type triterpenoids (Zhong et al. 2013).
Despite the small number of human studies, in vitro and in vivo animal studies have been extensive. I. obliquus has exhibited anticancer activity in various types of tumor cells. In vitro studies have demonstrated antiviral effects, platelet aggregation inhibitory activities, and anti-inflammatory and analgesic properties (Zhong et al. 2013). In vivo, antitumor activity, antioxidant activity, and an increase in hypoglycemic activity have all been demonstrated in mice (Zhong et al. 2013).
Although there is widespread use in Russia (Zhong et al. 2013), only two human studies were found in the peer-reviewed literature, and both are over 30 years old, as seen in Table 2. No controlled studies designed to assess the safety of I. obliquus were found and no studies were reported on clinicaltrials.gov (2015). Like many mushroom supplements, most of the evidence for safety and efficacy appear to be based on I. obliquus's long traditional use. 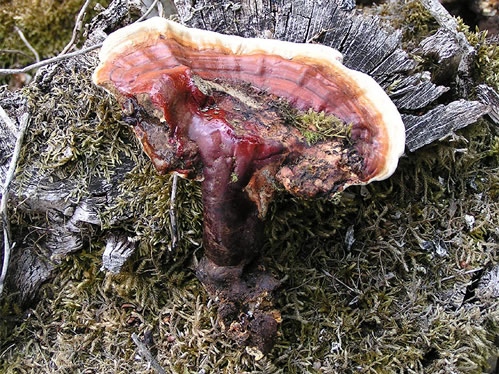 Ganoderma lucidum can be found growing on plum trees throughout Asia and in other parts of the world. It has a long history of use in Japanese and Chinese traditional medicine to “increase energy, stimulate the immune system, and promote health and longevity” (Chang & Buswell 1999). Modern uses of G. lucidum include treatment for coronary heart disease, arteriosclerosis, hepatitis, arthritis, nephritis, bronchitis, hypertension, cancer, and gastric ulcers (Boh 2007). Claims from supplement companies include its use in treating “insomnia, allergies, liver disease, anxiety, rheumatoid arthritis, and various forms of cancer” as well as its ability to “build resistance to illness, detox the body, and calm the nerves” (Myriad Mycology “reishi”; Terrasoul “reishi”).
Not only is G. lucidum one of the most frequently consumed dietary supplements, it is one of the most well-researched mushrooms. A wide range of in vitro and in vivo animal studies have been conducted to investigate the various health benefits of G. lucidum. These have provided evidence to suggest it has the potential to reduce the immunosuppressive response induced by anticancer drugs and abate autoimmune diseases. G. lucidum has also demonstrated anti-inflammatory, antidiabetic, antiviral, and antibacterial activity both in vivo and in vitro (Boh et al. 2013). This mushroom contains more than 50 types of polysaccharides and peptide-polysaccharides complexes in addition to about 120 bioactive compounds (El Enshasy & Hatti-Kaul 2013).
Many of the clinical trials for G. lucidum were designed to test its adjuvant use in cancer therapy although a variety of other conditions have also been studied. Twenty-six studies met the requirements of this review and are included in Table 3. Four additional trials involving the treatment of Parkinson’s disease, rheumatoid arthritis, and pediatric cancer were found on clinicaltrials.gov. One of these trials was not located in the literature search, and two did not meet the review criteria (Shing et al. 2008; Li et al. 2007). The fourth trial looking at the effect of G. lucidum on patients with head and neck cancer is currently recruiting patients (clinicaltrials.gov 2015).