The data and images of the vouchered specimens from 1997 to the present are available online through the Field Museum Herbarium. To find all specimens for a particular year (for example 2016), enter " NAMA 2016" in the Collector Number field. Searches can be made by family, genus, collector, or location. For more information see NAMA Voucher Collection Project.

The North American Mycological Association is uniquely positioned to make a signature contribution to the field of mycology. As an organization spanning an entire continent, NAMA can offer the scientific community thousands of specimens of a wide range of fungi collected — from regions and habitats of North America from the forests of the Appalachians, Rocky Mountains and Pacific coast, to the boreal forests of Canada, the Midwest oak woodlands, and the coastal plain of the Gulf.

Every year for several days, scores of NAMA members scout out hundreds of fungi from varied habitats within a broad geographic area surrounding the annual foray site. One specimen — a voucher specimen — of each species identified by an expert amateur or professional, is photographed, recorded, and, after being displayed, is dried and accessioned into the herbarium of the Field Museum of Natural History, the repository of NAMA’s several thousand voucher specimens representing hundreds of fungal species.

At each foray the display tables are laden with the hundreds of sorted, identified, and labeled species. Prior to the initiation of the Voucher Collection Project with the Colorado Foray in 1997, most specimens were discarded at the end of the weekend, while some were saved by interested mycologists. The NAMA foray lists, going back to 1962, are an indication of the variety of North American fungi, but no verification of the species or scientific research of material is possible unless voucher specimens are available. The Voucher Program Committee also compiled the species lists from 32 NAMA forays (1962 to 1995) plus the Wildacres, North Carolina regional forays. The NAMA foray database now lists over 3,000 fungus names. About 30-45 species are added to the list each year.

To learn more about the process at McCall, Idaho, in 2008, documented by Patrick Leacock, click here.

Every year, numbers of new species are added to the many familiar species such as Pluteus cervinus, which has been found nearly every year during NAMA's enhanced version of a "mycoblitz." The documented data as well as the loan of specimens to mycologists serve as important contributions to research, both on particular species as well as on biodiversity. The NAMA Voucher Collection helps to fulfill NAMA's mission of promoting "scientific and educational activities related to fungi" and embodies a verifiable and growing scientific record of the fungi of North America.

Why is the Voucher Program Important?

Species curve of past NAMA forays —
click on the image for a full size pdf.

This program plays an important role in fulfilling NAMA’s mission to further the scientific study of fungi. These specimens serve as reference collections for the species identified at forays across the continent. No longer just names on a list, these species are represented by vouchers that can then be used by researchers. Systematic studies rely on morphology (physical features) and molecular data (DNA) provided by collections. We are building a permanent collection that may in time become a great representation of North American macrofungi, available at a central location to researchers worldwide.

How are Vouchers Processed?

One of the most important steps in the process is for the collector to fill out a legible collection slip for each mushroom collection, including the foray number (or location, such as a milepost number, if you’re driving around), habitat, and, if you wish, your name.

Collectors maintain ownership of their collections until (and unless) the collector indicates otherwise. The collector may choose to keep a specimen or donate to another person, such as a mycologist working with a particular genus. To indicate a donation to NAMA and a possible inclusion in the Voucher Program, participants place the specimen, with the collection slip, on the incoming collections table. Many of the collectors’ finds will be accurately identified and appear on the display tables during the foray. A large number of the collected specimens (200-500) will be photographed, dried, and housed, with data such as the location and the collector, as part of the permanent NAMA collection. 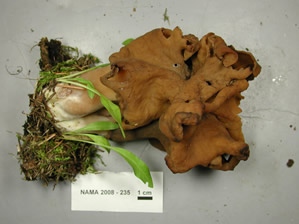 The specific goal of this program is to document each species name on the foray species list with a single voucher specimen (which, of course, may include several fruiting bodies). Specimens are selected as vouchers based on the condition of the specimen, whether it is new to the current foray, and whether a voucher has already been made. After being identified or verified by a mycologist, the data for the collection is entered into the foray database, a digital photo is taken, then the specimen is usually placed on the display table. Later, these voucher specimens are dried and bagged for shipping to The Field Museum.

Every effort will be made to display collections of rare specimens prior to their preservation as vouchers. Individuals with special interest in particular collections that they did not collect should make a request to the Voucher Program staff. Usually provision can be made to split specimens for sharing with interested parties.

Locations of NAMA Forays — click on the map for a full size pdf.

If you have any questions, feel free to contact Patrick Leacock by email or Andy Wilson by email. We are indebted to all the NAMA foray participants, volunteers, mycologists, and students who contribute their time and talent—and fungal finds—toward making the Voucher Collection Program a success.