Field Guide to the Lichens of White Rocks (Boulder, Colorado) 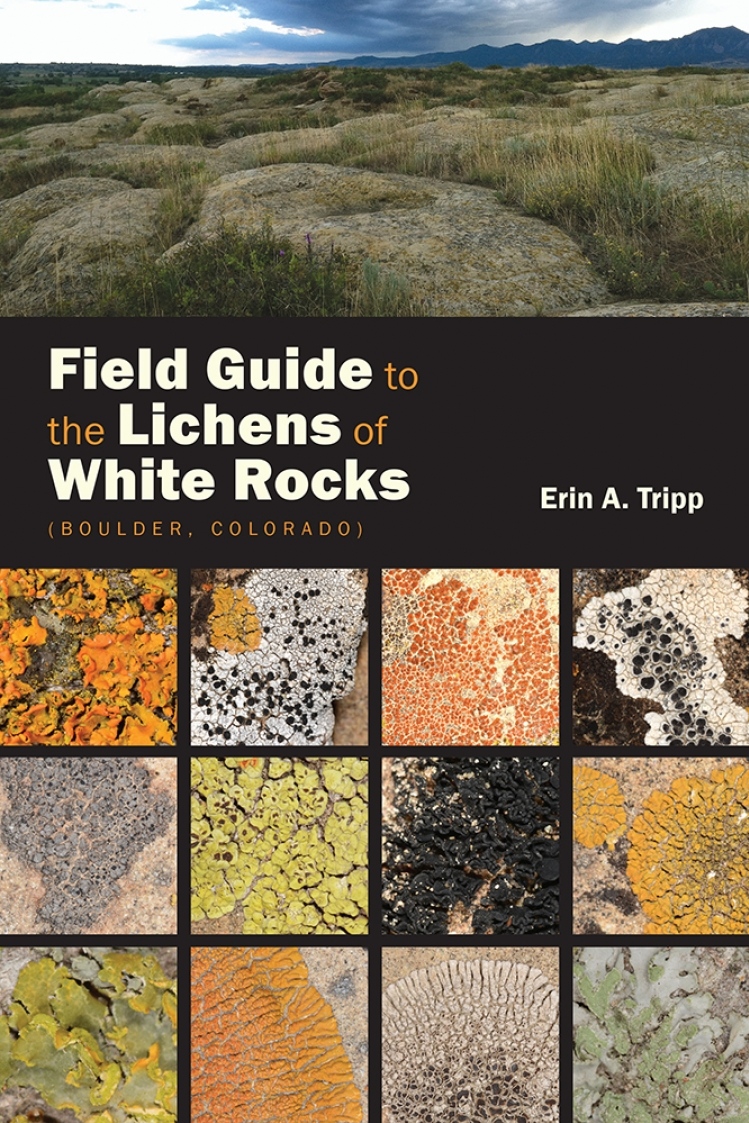 This focused field guide, which was produced in Boulder, Colorado, deals with the lichens that occur in a City of Boulder natural area (White Rocks Nature Preserve). The author, Erin Tripp, is assistant professor in the Department of Ecology and Evolutionary Biology at the University of Colorado located, naturally, in Boulder.

Attractive and nicely put together, the book starts with 15 pages of Introduction (Why Lichens? Lichen Biology: The Basics; Lichen Reproduction; Growth Forms; Substrates; Additional Remarks; and About the Guide); followed by the Field Guide (the species descriptions); an Appendix (Checklist of the Lichens of White Rocks), and Dichotomous Key to the Lichens of White Rocks; Glossary; Literature Cited; and Index.

Fifty-six taxa are described and illustrated, 41 of which are crusts and most of the others closely appressed foliose species. Descriptions are presented alphabetically and appear on the right-hand page. The species name is given, without authority, along with a common name, many of which appear to have been made up for the book. The text begins with a paragraph of helpful commentary, sometimes as much as a half page in length, that provides key distinctive features and comparisons with similar species. This is followed by very brief entries consisting of Chemistry, Substrate and Ecology, Distribution, and Literature citations. Chemical spot test reactions are given, but nowhere are they explained. While this will be no problem for someone who knows a bit about lichens, it likely will be confusing for others. Likewise, references to spore size and shape, and the presence of compounds disclosed through thin layer chromatography, will be of use only to more experienced users.

The main photograph for each taxon appears on the left-hand page. Each fills the entire page, with no margin. Nearly all are extreme close-ups. While this allows detail to be shown, I would have preferred a more typical approach, not quite so close up, and showing a bit of the surrounding rock surface to provide a sense of actual size, particularly because no scale is provided and there are no dimensions cited in the text. Color rendition is good and the images should prove useful for identification purposes. In many cases, a small inset photo is included, usually to provide an even closer view of specific structures such as apothecia.

Details of the presentation would have benefited from careful editing, including by someone familiar with geology and its terminology. There are quite a few typos. In places where the reader’s attention is directed to a particular part of a photograph, the direction was written with reference to the photo in landscape orientation, but the photos are printed in portrait orientation. Sandstones are named for their texture and can have many chemical and mineral compositions. Thus they are not an example of a siliceous (not “silicaceous”) rock as, for instance, there can be calcareous sandstones. Other geological terms, such as “formation,” also are used incorrectly.

Although, to judge by the back cover text, the guide was intended for use by everyone from beginners to experienced lichen enthusiasts (“weekend naturalist and professional lichenologist” alike), I’m not sure it is all that “user friendly” for the uninitiated. In most cases, they aren’t going to have access to microscopes, thin layer chromatography, etc. and the microscopic and chemical features are heavily used in the key, often as single features in a lead. Statements to the effect that a species is “impossible to confuse” or “cannot be mistaken for” are very misleading. Crustose lichens are not an easy group to work with and human beings have a seemingly limitless capacity for confusing even quite dissimilar things.

I am not in favor of force-fitting “common” names for organisms that most people are unfamiliar with, which includes lichens in general and especially crusts. Rarely do such names ever get widely used, even when they are good ones. So I have a hard time believing that names such as the following will make it into the general lingo — stool pigeon, Rocky Mountain sunburn (even though the species is described as “known primarily from Arizona to California”), flaming cowgirls, a textured dilemma, my old friend, eggplant in garlic sauce, volcanic kelp, backcountry pancakes, purple prose, and rib ticklers. Perhaps they are meaningful to the author, but will they really facilitate communication among other folks?

So who might want to buy this guide? White Rocks is a rare habitat for the region and the Preserve is closed to public access, other than by scheduling a staff-led tour or initiating a research project. The bulk of the species are crusts, which are notoriously difficult to work with and so are ignored by many in the small subset of the general population that has an interest in lichens. Thus, I’m not sure it will appeal to a general naturalist crowd. The strongest aspect of the book lies in its providing a detailed record of one group of organisms from the Preserve. All of the lichens so far recorded from the site are included, with photos tied to voucher specimens, and all taken at White Rocks even in cases where Tripp had better quality photos of a species, but taken at another site. As such it is an authoritative and valuable resource. So to me, the book probably will be of most use as a handy accessory text for Rocky Mountain licheneers with enough experience and courage to have begun to tackle the crusts.