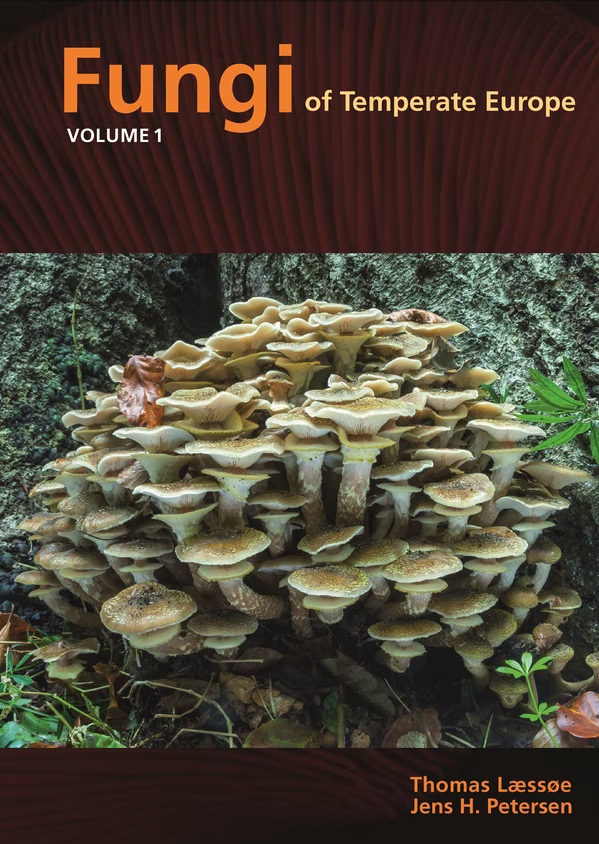 If you don’t have time for reading, here’s the bottom line: anyone who has an interest in mushrooms should own this (actually these) big amazing book(s), regardless of whether you live in Europe or not. Although not cheap (price recently increased from $110), you get a heck of a lot for the money (11.5 lb!). If you do have time for reading, I’ll explain why you should have it.

The late Harley Barnhart once opened a review of a marvelously illustrated Japanese mushroom book by stating “After 20 years of effort and God knows how many dollars, I thought once that I had become a pretty fair photographer of mushrooms. Last week this book arrived and, for a time, I had to fight the urge to burn all my slide files and start over.” At the time, my own photographic skills were not terribly advanced. But now, 30 years later, I know just how Harley felt. Jens Petersen is, quite simply, the best all-around mushroom photographer there is. But the quality of the photos is just one humbling aspect of these sizable volumes — I thought I had seen a lot of different mushrooms and knew the names of a lot of genera — now I know better.

I could also relate to the thoughts expressed in the Preface: “’I am lost — I cannot fathom nature anymore ... ‘ exclaimed one of the authors to the other after having experienced parts of a forest completely devoid of fungal fruitbodies bordering other parts with thousands. The longer you are in the game, the more you realize how little you understand. We have now been engaged in mycology and fungal identification for more than 40 years and a synthesis of our combined experience would seem desirable. It would have been easier if mycological knowledge had stabilized and many of the problems had been settled. Instead, we experience a period with constant change and much confusion. Our ignorance still appears to be monumental ... Nevertheless, we hope that the concept applied in this publication will help the enthusiast to better understand the complexities and not feel completely at a loss when faced with an unfamiliar fungus.”

Thomas Læssøe is a mycologist and senior researcher at the Natural History Museum of Denmark. He has previously been a senior scientific officer at the Royal Botanic Gardens, Kew and associate professor at the University of Copenhagen. He is the author of several guide books, wrote most of the text, and contributed many photos. Jens H. Petersen is a mycologist, graphic designer, and photographer and he provided the majority of the books’ photos as well as the “wheels” and also did the design and layout. He taught mycology at Aarhus University for more than 20 years and is the author of The Kingdom of Fungi (see The Mycophile July-August 2013 for two reviews). Petersen and Læssøe also created the online identification tool MycoKey (www.mycokey.com).

Following the Preface and Acknowledgments, the introductory material is covered in about 25 profusely well-illustrated pages. Topics include Scope and Design (of the book), answers to the question, Why Study Fungi?, a biological and ecological overview of The Fungal Kingdom, Fungal Biogeography and Habitats, sexual and asexual reproduction, how to collect and study mushrooms (I use that term in its broadest sense, including VERY tiny cups, etc.) macroscopically and microscopically, and even a brief introduction to the use of DNA sequences. Over 1600 pages later, 370 Literature citations, Index (an index to that volume’s genera is also included on the endpapers), Glossary (a shorter version — Often Used Terms, is included on an endpaper in each volume), and Photographer credits complete the coverage. Now for the in-between ...

Usually I like to do my own species count when preparing reviews but there are only so many hours in a day so, for this one, I’ll take the publisher’s word for things: “Featuring more than 7,000 photographs, this lavish two-volume set treats more than 2,800 species of fungi across the region.” Wow.

The species are presented in about 80 “form groups,” each starting with an innovative comparison “wheel.” Many of the groups are ones seen in pretty much every mushroom guide — such as gilled mushrooms, boletes, chanterelles and morels — but there are others that other books rarely or never include, such as cyphelloids and hysterioids, which stretch even my broad definition of “mushroom.” Hence the use of “Fungi” in the book’s title. A large number of the species are things you will never see other than in the pages of this book. And how Petersen and others have found so many extremely tiny things is beyond me. Paging through the two volumes will provide one with a pretty complete sense of the extraordinary diversity of the macrofungi and near-microfungi.

The wheels are an effective way of summarizing key information (ecological group, substrate, spore and cystidia shape, general macro appearance) for large numbers of groups, be they genera or otherwise. A recent reviewer claimed that they represent keys that you work from the inner zone outward. But I don’t see how they could work that way — who first looks at cystidia before the overall appearance? But they do allow you to see at a glance, for instance, what makes a hydropus different from a hodophilus. The authors have generously made all the wheels available as a large (~180 MB) PDF file at www.mycokey.com. Large printouts of them would be excellent additions to mushroom displays at forays and exhibits.

Each set of species is introduced with its wheel, which includes page references to the (usually) genera. Species are listed by scientific name, but without the author (I wish those would have been included). Common names are not used, probably because the book was originally published in Europe (in Danish, as Nordeuropas svampe) with an intended audience in many countries with different languages and, thus, different common names. The species treatments are all in running-text form, rather than the typical categorized (cap-gills-stem- edibility-etc.) description as the authors rely on the photos to convey information more effectively than words often can. The text typically mentions the key identification characteristics, ecological occurrence, distribution and abundance, and a look-alike or two, using a coding system to indicate whether or not the mentioned species is treated in the book and, if so, in which direction you proceed to find it (up or down on same page, one page forward or back, or multiple pages forward or back). Occasionally a synonym or misapplied name is mentioned. The best edible and most dangerous poisonous species are indicated by green and red symbols; otherwise, edibility is not mentioned. At the top of each page is a helpful nutshell description of the group of species treated on that page, for instance, “dry brownish tricholomas” and “collybioids with cabbage-like odour or rooting.”

The photos are, for the most part, absolutely superb and are of generous size so that details are visible, reducing the need for a lot of descriptive verbiage. Occasionally there’s an ordinary one and occasionally the color is exaggerated or not quite accurate, but even those are of at least good quality. In addition to the aspect shots, there are lots of inset close-ups of gill edges, marginal hairs, surface textures, etc. It took a lot of forethought to have taken all those photos — only a committed teacher would have done it. The Volume 1 photos are impressive enough, but they show mostly relatively large fungi — gilled mushrooms and boletes — and we’re used to seeing good-quality pictures of them in other books. Volume 2 is where Petersen’s talent really shines. Some of the photos here, particularly of tiny ascos, are simply amazing. I’m accustomed to seeing scale bars in photos measured in micrometers (μm), but those photos show spores, cystidia, or other parts of mushrooms, not the entire fruitbody. As good as Harley’s photos of tiny slime molds were for their time, they would be no match for what can be done shooting through a dissecting microscope and stacking individually-focused exposures into a single stunning image using computer software.

No book is perfect so, of course, I have a few nit-picky things to mention. There are far too many typos. It would have been nice to have more “also known as” mentions, given the name shuffling that many of the species have experienced. For my taste, far too many of the treatments begin with statements like “Tricholoma ustale is a medium-sized, sticky to slimy Tricholoma ... “ — we don’t need to be told it’s a tricholoma, its name already told us that. The number of words that could be deleted then could have been used to add the authors to the species names. In many cases, the comments suggest that the species should be easy to identify. Perhaps true for Læssøe and Petersen with their combined 80+ years’ experience and perhaps true once one figures out what genus the thing is in, but that latter task will often be difficult (especially with the small cup fungi where genus-splitting has run rampant), even with the helpful aids provided. But these are minor quibbles.

So, a huge European book with lots of beautifully illustrated species — but how useful might it be for identifying mushrooms in North America? Not nearly as much as for Europeans obviously. Certainly many of the names are ones I recognize as being applied on this continent. But, with each year, we find that more of our similar-looking species actually are different enough to deserve their own names. Even with that caveat, however, finding a very similar species in the book will at least put you in a relatively small ballpark and, for many of the tiny fungi in this book, you won’t be able to do that with our current guides. However, even if none of the species occurred in North America, the book would still be greatly valuable as a coffee-table denizen that you could page through bit by bit and provide lots of armchair foray opportunities. As I said before, you will see things here that you will never see anywhere else.

Anyone who has an interest in mushrooms should own this (actually these) big amazing book(s), regardless of whether you live in Europe or not. Although not cheap (price recently increased from $110), you get a heck of a lot for the money (11.5 lb!).