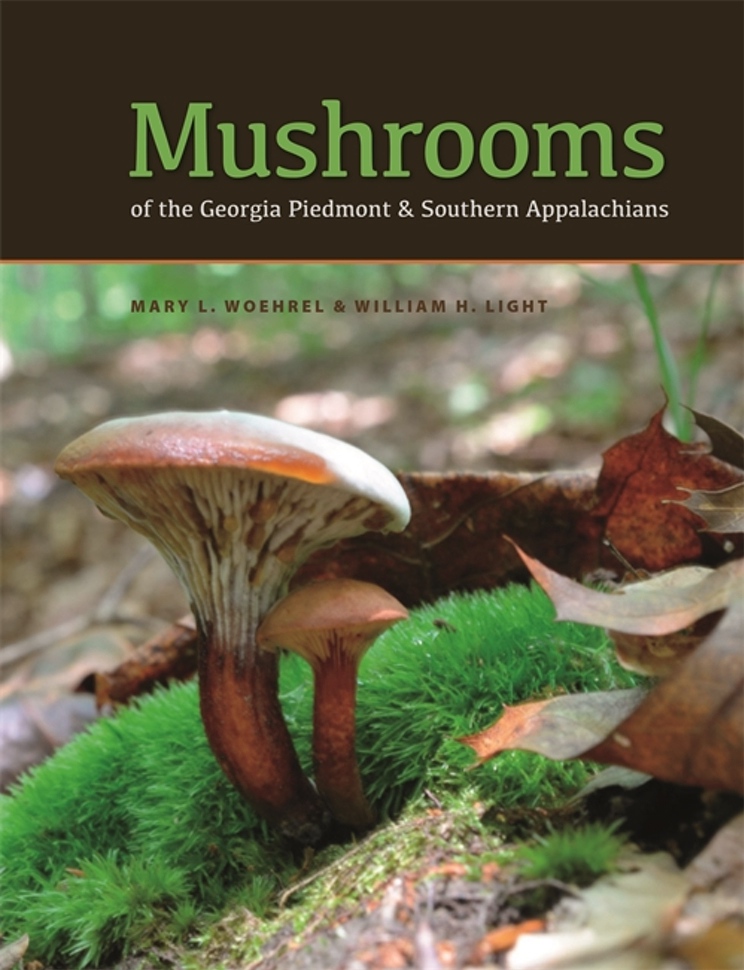 Although the Preface states that This book is intended to be a field-durable guide to the wild mushrooms of Georgia..., I doubt whether many persons would take this hefty tome into the field. The pages are standard letter size and the hardcover volume tips the scale at just over 6 pounds—a bit much if one also hopes to be carrying a basket full of mushrooms. And the physical weight is matched by the weight of its content (the subtitle, A Reference is apropos), so this might not be a guide for everyone. Let‘s take a look at it. The contents ...

Although the next section is titled Dichotomous and Pictorial Keys to the Major Mushroom Forms, there‘s only one key, a dichotomous one. Three pages of numbered thumbnail-size images follow. They were chosen well, effectively illustrate particular features, and are cited in the key; however, they do not constitute a key by themselves. Given that half of the couplets in the text key include a second lead Fruitbody otherwise, it takes a while to work through and so might have been better to just provide a simple pictorial key to the major morphological groups (gilled mushrooms, boletes, corals, etc.), as many other books have done.

Although most of these categories are typical ones, a few, such as Brown Look-Alikes—Some Edible, Some Deadly Poisonous, are unusual. In this case, the mushrooms in the category don‘t look all that much alike, only one is deadly poisonous, and many of them are not brown. Odd species placements include the cedar-apple rust inexplicably appearing in the Corticioid group.

The book concludes with a Glossary of Some Mycological Terms, Index of Common Names, and Index of Scientific Names.

The Preface contains a number of snarky comments—Many of the photographs in current guides are ’Hollywood‘ depictions (although just what this means is not explained) of these fungi that do not show the various forms and color morphs that fungi assume in nature; Nomenclatural problems abound in most of these works (referring to other, unnamed, field guides); Specialists often tend to throw their keys together as an afterthought, casting about for features they can fit into a dichotomous-style key without any consideration given to the features‘ relevance or usefulness. These sorts of comments give the book an uncomfortable tone that carries into many of the nomenclatural comments in the species accounts.

Given that the main purpose of the book is to serve as a tool for identifying mushrooms, the Introduction is much too long and contains far too much detail, much of it not relevant to identifying mushrooms. Although I fully support mushroom hunters learning all they can about the fascinating biology of fungi, there is no need in an identification guide for such things as a lengthy discourse on high-level biological classification (still very much in flux), comparison of the use of commas between the zoological and botanical/mycological nomenclature codes, discussion of form-genera and form-species, or a figure showing zygospore formation (zygo-mycetes do not produce mushrooms). In most places, Division is used for the taxon below Kingdom and above Class. Although formerly used, and still technically allowable, mycologists and botanists now nearly all use Phylum, to provide consistency with other groups of organisms. However, on the plus side, it‘s good that the artificial nature of categories and classification in general is emphasized. The pigeonholes exist in our minds, not in nature.

The Introduction also suffers from a much-too-large number of factual errors (mostly involving details), over-generalizations, and misleading statements, and is in need of a comprehensive editing to catch the many repetitive passages, conflicting statements, inconsistent terminology, and miscellaneous goofs such as incorrect unit conversions, misspelled author names, and wrong dates in reference citations. For instance, formally defined taxa do not go out of existence when revised classification schemes cause them to fall out of favor—they just become unused. Not all basidiomycetes have a two-locus, multiple allele mating system. The tetrapolar mating system involves two, not four, DNA loci. Malus is the genus of plants that includes apples, it is not the genus of the apple scab fungus. Not all mycoheterotrophic plants are associated with ectomycorrhizal fungi—there are also many associated with arbuscular mycorrhizal fungi. Other examples: In one place cells of a filament, in another compartments of a hypha; allantoid here, but sausage-shaped there. We are told that certain reportedly medicinal mushrooms are without apparent adverse side effects, but, a few paragraphs later, that they could have unwanted side effects or deleterious interactions. Likewise, Studies on the anticancer effects of Reishi have not been convincing, but then Several compounds in Reishi were shown to inhibit a variety of human cancers. It is reported correctly that the arbuscular mycorrhizal fungi (members of the Glomeromycota, often incorrectly referred to here as mycorrhizae) are no longer considered to belong to the Zygomycota (an out-of-favor, more or less trash-can phylum whose disparate members are being transferred to many other groups), but later there is mention of zygomycetes being involved in arbuscular mycorrhizas. The Basidiomycota is described as representing 37% of the described species of fungi, and the Ascomycota as representing 75% of described species. That makes 112% without including the Chytridiomycota, Glomeromycota, and zygomycetes. Lichenicolous fungi are those that grow on lichens, they are not the fungi involved in the lichen itself. It is initially stated that the fungi involved in lichens are all ascomycetes, but a later discussion correctly describes the small minority of lichenized fungi that are basidiomycetes.

The species accounts describe and illustrate, by my count, 318 mushroom species and 12 slime molds. Forty-four of the mushroom species are not covered in other books for the Southeast (and somewhat beyond). These numbers are nearly the same as those (321 and 50) for the recent Southeastern Mushrooms, by Todd Elliott and Steve Stephenson (reviewed in The Mycophile, May-June 2018). Common names are used for the main heading of each account, which I found puzzling, given the authors‘ emphasis on scientific nomenclature. Most of the names used are familiar or fairly obvious ones, but a few struck me as newly invented and unlikely to be widely used, such as dead man‘s rubber gloves, cross-veined troop mushroom, and landslide mushroom. The Latin binomial appears below the common name, in a smaller font and, below that, the photographs, typically two or three, arranged in a row. The detailed text includes the full name of the fungus, complete with author name(s) and date and place of publication; sometimes the basionym is given; a breakdown of the higher taxa of which the species is a member—phylum, class, order, family; the derivation of the scientific name; general description of the fruitbody; spore-print color; key microscopic features; occurrence (substrate, habitat, distribution); edibility; and comments.

The species accounts text is the strongest aspect of the book, especially the detailed commentary that gives key features for distinguishing look-alikes and explains misapplied names and other nomenclatural issues. Like the Introduction, the comments sections would have benefited from a careful editing to catch obvious errors, eliminate repetitive information, and generally improve clarity. For instance, in the comments for Annulohypoxylon multiforme and A. cohaerens, Daldinia concentrica is cited as a possible look-alike. However, three pages earlier, it is stated that D. concentrica occurs only in Europe (true, as far as is known, but such absolute statements should be avoided) so the look-alike comparison(s) should have been made with the southeastern U.S. species of Daldinia, such as D. childiae.

Most of the photographs are not the usual field guide shots, which typically show a group of the mushrooms in the field, with individuals selected to show the progression from young to mature, and arranged so as to illustrate the key features for identification. Instead, most photos show a single individual, sometimes clearly in habitat, other times not. Although focusing closely on an individual mushroom offers the benefit of showing particular features well, there is a tradeoff in not having a group, as it prevents the user from gaining much appreciation for the variability in the species. Although not especially large, the size of most of the photos is adequate to show key features. Many close-up inset photos are included, which is helpful. The technical quality of the photos varies. Some are quite good, others are not as well lit and exposed as they could have been. A number of photos taken in Europe are included, which cannot be recommended given the frequency at which we are finding our mushrooms to be different from their overseas counterparts. In a few cases, the photographs are not of the species being described. For instance, two of the three photos for Marasmius oreades are of an agrocybe, perhaps A. pediades, and the third shows an apparently brown-spored mushroom (a psathyrella perhaps?) with gills that are too thin and closely spaced to be M. oreades. Based on their coloration, the photos for Hydnellum aurantiacum and H. peckii appear to be of other hydnellums.

I did not follow up on many of the nomenclatural discussions, as most of them appeared to be accurate. However, given the number of times that the authors point out mistakes in the application of names that others have made, it is ironic that the first species they describe is misnamed. The common yellow morel that, in North America, we have traditionally called by the European name, Morchella esculenta, is now correctly named M. americana, not M. esculentoides, which is a later synonym (by a matter of mere weeks). Another obvious error is in claiming that the name, Cortinarius marylandensis, has not been validly published. It has, and those other guides that are said to be in error were not wrong in using the name (although some of them might have done so before it was actually valid). For those who are interested in the sometimes lengthy lists of synonyms associated with the species names, the authors have compiled, based on information in Index Fungorum / Species Fungorum, MycoBank, and other sources, a list that is available on the book‘s website.

Although I applaud what the authors set out to do, clearly there are a lot of shortcomings in the execution, most of which reflect a lack of attention to detail. So, given that, is this a book that I would recommend a mushroom hunter in the Southeast buy? It depends. Despite my concerns, I think that experienced mushroomers (including those known in certain circles as taxonomy nerds or taxonomy geeks) will appreciate the detailed treatments and nomenclatural information. Thus, they will find a lot of value here and, for them, it will serve as a very useful reference. However, less experienced mushroomers might not be prepared for the level of technical detail and would be better served by other more approachable field guides, such as Bill Roody‘s Mushrooms of West Virginia and the Central Appalachians (reviewed in The Mycophile, July-August 2003), the aforementioned Mushrooms of the Southeast, or even Tim Baroni‘s Mushrooms of the Northeastern United States and Eastern Canada (The Mycophile, January-February 2018), which, despite the title, has a large number of species that extend as far south as Georgia. Although these don‘t go into much detail on fungus biology, Nik Money‘s Fungi: A Very Short Introduction (The Mycophile, July-August 2018), offers an inexpensive primer on the subject.