Mushrooms of the Northeastern United States and Eastern Canada 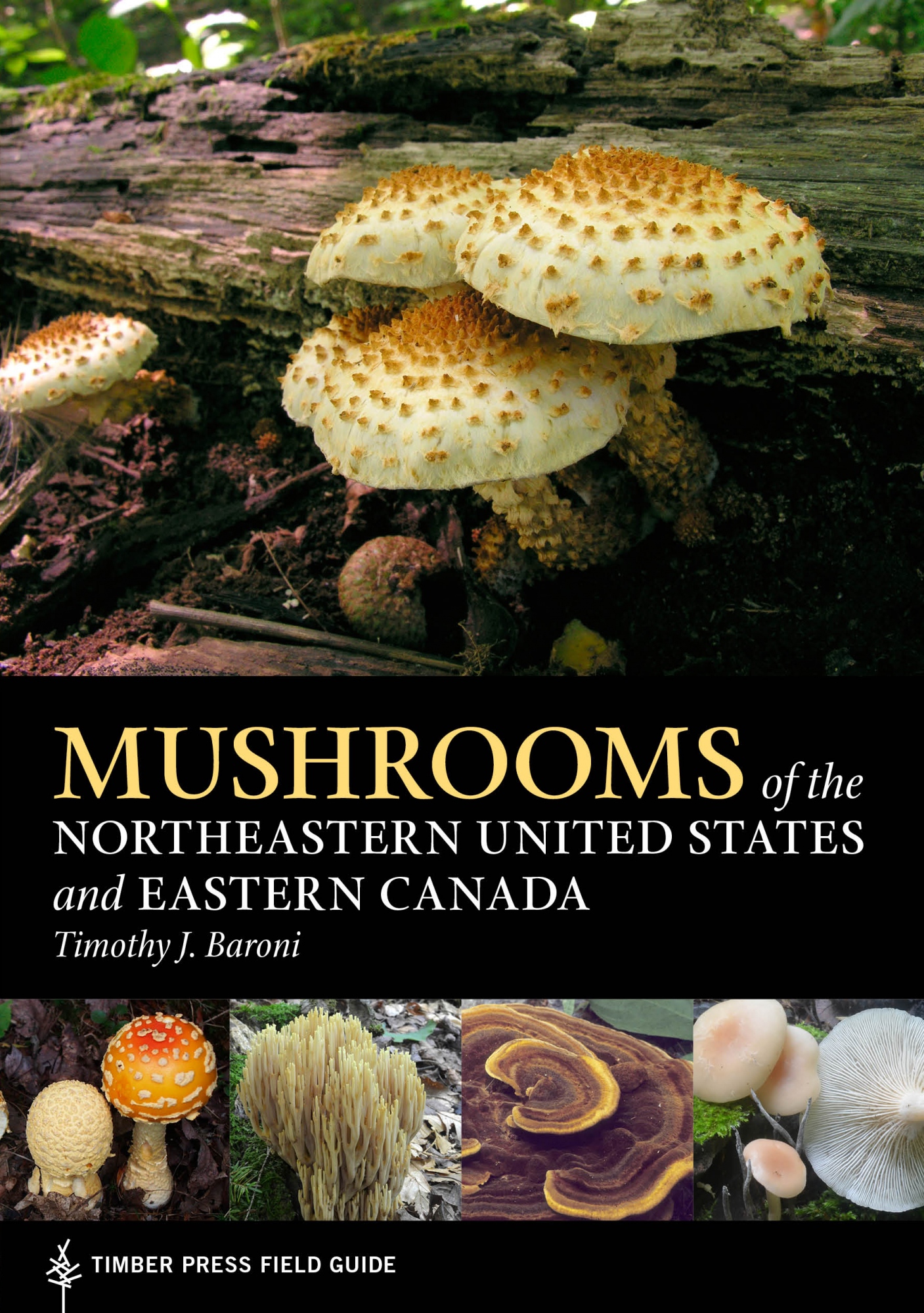 In 2006, Timber Press initiated a series of field guides for the Pacific Northwest with the publication of Wildflowers of the Pacific Northwest. Mushrooms of the Northeastern United States and Eastern Canada is the tenth book in the series and, as the title indicates, the Press has expanded its range beyond the Pacific Northwest, with this being the third volume from another region of North America. Two of the previous guides dealt with mushrooms—Mushrooms of the Pacific Northwest and Mushrooms of the Rocky Mountain Region: Colorado, New Mexico, Utah, Wyoming. The former covers 465 species in 352 pages and reviewers noted that the too-small size of the photos reduces their effectiveness for identification purposes. The latter features much larger photos than the earlier volume, but covers only about 200 species in 298 pages. In this third mushroom guide, Timber Press has found a winning combination—offering a high species count with detailed-enough descriptions and nice large photos, while keeping the thickness in line with being a field guide and the list price at $27.95.

Tim Baroni is Distinguished Professor of Biology in the State University at New York. He teaches at SUNY–College at Cortland and works on the systematics of macrofungi. He has a particular fondness for the angular-pink-spored mushrooms of the Entolomataceae (Entoloma, Nolanea, Leptonia, et al.) and has conducted much field research in the Caribbean and Latin America.

The content and organization of the book are typical for a field guide. The front matter is rather short, consisting of a single 17-page Introduction, addressing the Geographical Scope of the book (defined as the region encompassed by Connecticut, Delaware, Illinois, Indiana, Maine, Massachusetts, [no Michigan?], Minnesota, New Hampshire, New Jersey, New York, Ohio, Pennsylvania, Rhode Island, Vermont, Wisconsin, New Brunswick, Newfoundland, Ontario, and most of Québec [no Nova Scotia and PEI?], a brief overview of the Toxins in Fungi, basics of the Biology of Fungi, What To Call It, review of the basic Mushroom Structures, and finishing with advice on Collecting and Identifying Fleshy Fungi. Given the title of the book, one might assume that all of the species described in it are mushrooms. However, the introduction states that botanically (not mycologically?) a mushroom is a fleshy fungus fruit body that has gills, while allowing that sometimes boletes also are considered mushrooms. Although I agree with the suggestion that the user learn the names of the various groups of fleshy macrofungi (the usual morphologic groups such as polypores, corals, puffballs, and jelly fungi), I see no harm in considering them all to be mushrooms. Later references to true mushrooms further complicate things.

The back sections include a brief how-to on Basic Microscopy, Glossary, Further Reading, Mycological Resources (lists of websites and organizations), Photo and Illustration Credits, and Index to both scientific and common names.

The main part of the book occupies nearly 550 pages, on which are described and illustrated approximately 540 species. Each entry includes a large bold-face heading with the species name and authority (with the authors‘ names spelled out for those of us who don‘t recognize all of the author abbreviations). This is followed by the common name(s) for those that have them, a list of principal synonyms, and a capsule description. The more detailed description includes macroscopic features such as cap, gills, stem, ring, flesh, spore print, odor, and taste, plus habit and habitat, range, and microscopic features, the latter usually labeled as Spores. Technical jargon is kept to a minimum. The treatments conclude with comments that address key features (often repeating them from the capsule description), similar species, misapplied names, and edibility. Most of the ranges are given as widespread, which is not very helpful without an indication of the area being referred to—the northeast, as defined for this book? North America? The world?—and the specific sort(s) of habitat in which the species occurs. Each description includes a photo, most of which occupy the full width (or nearly so) of the page. They range from borderline adequate (such as singletons and pictorial shots that fail to show key diagnostic features) to excellent in quality, and the generous size greatly enhances their utility for identification.

As has been done in the earlier Timber Press mushroom field guides, the identification process involves selecting the appropriate morphological group for the specimen, turning to the section of the book where that group is presented, using the keys to narrow the possibilities, and then carefully comparing the mushrooms in hand with the photos and text descriptions. Icons for the different groups appear in the front endpapers, accompanied by page references for each of them. Finding the section for the group you‘re after is further facilitated by the use of different colored bars across the tops of the pages. The endpaper icons are the same ones used in the Rocky Mountain guide and so there are a few minor differences between their categories and the ones Baroni uses in the text. However this shouldn‘t be much of a bother if it is noticed at all. The group sections each open with a short general introduction, followed by a polychotomous key intended to reduce the universe of photos that need to be examined in search of a match. These keys employ a few key features, such as substrate or gill attachment, to divide the included genera into subgroups. A short list of key features is then presented for each genus. There are no comprehensive genus descriptions.

Seeing as how this is not the first mushroom book for northeastern North America, it‘s a fair question whether someone who already owns books such as Mushrooms of Northeastern North America (Bessette et al.), Mushrooms of Northeast North America (Barron), and Mushrooms of the Northeast (Marrone and Sturgeon) should add this one to his/her collection. By my count, together, these four volumes describe (in some detail) and illustrate 1070 species. The Bessette, Barron, and Baroni books cover 631, 554, and 542 species, respectively. In each of these books, about one-third of those species are in only that one of the four books (215, 162, and 168 unique species, respectively). The Marrone guide covers far fewer species (177 described and illustrated, with additional species briefly mentioned and/or pictured) and only 11 of them are unique to this book. Thus, even someone who owns all three of the earlier books would benefit from the additional coverage offered by Baroni‘s new guide. In addition, its nomenclature is, with a few exceptions, up-to-date, and it offers the best combination of sufficiently comprehensive descriptions and large, clear, close-at-hand photos of the four, in an attractive package, at a reasonable price. Buying it should be an easy decision for mushroomers on the eastern side of the continent, both those with bulging bookshelves and those who are just getting started building their library of mushroom books.