Shiitake dermatitis was first reported by Nakamura in 1977 and he later reviewed 51 cases (Nakamura 1977, 1992). The symptoms are dark red, almost purple welts all over the body so that the victim appears to have been flogged or to have been vigorously scratching a poison oak rash. The cause is consumption of either raw or only lightly cooked Shiitake. The syndrome was long thought to be restricted to Asia since most of the world’s production of Shiitake [Lentinula edodes (Berk.) Pegler] occurs in Asia. However, in 2006 a case was reported in England (Mak and Wakelin 2006) and in 2010 a case was reported in France (Herault et al 2010). The February 18, 2011 New York Times carried an article by Lisa Sanders, MD about a 56 year-old Portland, Oregon woman who developed a rash that initially stumped her dermatologists, until one of them enquired as to whether or not she had recently consumed raw or undercooked Shiitake. She had tasted a sample at her local grocery store three days before the rash appeared. 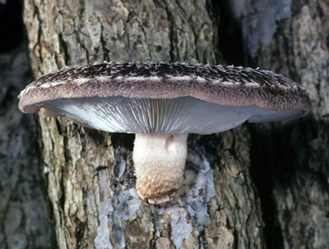 Sometimes known as flagellate dermatitis, Shiitake dermatitis is a toxic reaction to a starch-like polysaccharide known as lentinan found in Lentinula edodes. Shitake dermatitis does not respond to the prick tests used by dermatologists, but there would be a response if it were an allergic reaction. Lentinan has antitumor activity and is used as an adjunctive treatment for colorectal and gastric malignancies in Japan (Chihura et al 1969). Clinically the rash resembles flagellate dermatitis caused by Bleomycin, a sulfur-containing polypeptide derived from Streptomyces verticillus.

Lentinan is decomposed upon heating and so it is only consumption of raw or partially cooked Shiitake that poses a problem. Since lentinan is used medicinally in Japan, a fair amount is known about it. When just over 500 patients were exposed to an intravenous version of lentinan, only nine developed this streaky rash. This helps to explain why the rash is still not very well known in North America. Only 2% or less of the population is likely to be affected and then only if they consume raw or undercooked Shiitake.

For affected individuals, the rash usually begins about 48 hours after consumption of raw or undercooked Shiitake and lasts for about 10 days. It is a toxic, not an allergic reaction and is believed to result from lentinan triggering blood vessels to dilate and leak small amounts of inflammatory compounds just beneath the skin. The rash typically begins as red areas that neither hurt nor itch. Soon red blisters form and then harden over the red regions but the rash is not initially itchy like a poison oak rash would be at that point. The red streaks then turn to purple raised welts which persist for days.

While Shiitake dermatitis itself is a toxic reaction, not an immune-stimulated allergic reaction, consumption a large amounts of raw Shiitake in individuals who would otherwise be unaffected, can lead to an allergic response (Kopp et al 2009). Sensitized individuals react strongly when pricked with raw Shiitake but not with cooked Shiitake, indicating that they have developed an allergy. Some workers in Shiitake grow houses develop an eczema-like rash due to Shiitake specific immunoglobulin (Aalto-Korte, et al 2005). There are also documented cases of allergic and chronic hypersensitivity pneumonitis induced by spores of Shiitake.

Information about this toxic reaction to mushrooms will be added to the toxic mushrooms syndromes page on the NAMA website (http://namyco.org/toxicology/poison_syndromes.html) as part of an effort to provide detailed information about the varied causes of mushroom poisoning in one convenient location.

This page also available as a pdf file.