A Field Guide to Medicinal Mushrooms of North America 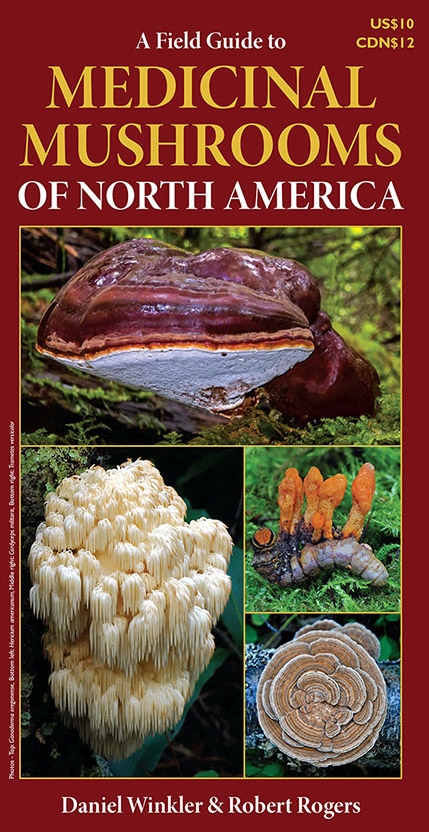 Daniel Winkler and Robert Rogers
Mushroaming Publications. 2018.
Copies can be purchased at www.mushroaming.com. for U.S. residents and for Canadians at http://www.selfhealdistributing.com/
$10 US, $12 Canadian

This small field guide booklet is an accordion-style folded 8 panel double- sided brochure on good quality heavy- weight paper with a glossy finish. It seems relatively water-resistant. Given that those most interested in consulting this educational work on traditional fungi employed in various folk cultures might take this along with them in a crammed backpack or mushroom basket, it probably could have been a bit sturdier. It is in the same format of three others produced by Daniel Winkler: Field Guide to Edible Mushrooms of the Pacific Northwest, Field Guide to Edible Mushrooms of California, and Field Guide to Tropical Amazon Mushrooms. (See reviews by Steve Trudell in the Mycophile January-February 2012, November-December 2012 and May-June 2015).

The authors are Daniel Winkler and Robert Rogers. Daniel is perhaps most known for his study of the medicinal, social, economic and environmental effects of the ascomycetous club-shaped Ophiocordyceps sinensis, a hugely popular parasitic fungus that infects insects. It is found in high altitude locations in Tibet, Nepal and other regions west of and including mountainous areas of China. He has also written numerous articles and books and leads travel expeditions to various locations around the world. Robert Rogers has been an herbalist for some 45 years, author of many popular books and articles on medicinal herbs, lichens and fungi, and assistant clinical professor of Family Medicine at the University of Alberta. Both men regularly lead walks, take excellent photographs and are crowd-pleasing presenters for mushrooming and other naturalist organizations.

The cover panel has the title and four photos of fungi displayed against a dark burgundy background. On opening the booklet, there are five categories addressed on the left panel: an introduction to fungi discussing their substrates, and functional roles in the environment; instructions on correctly identifying specimens, accompanied by the caveat that a number of them are difficult for the novice to correctly ID. They advise on consulting field guides for further in-depth information on properly identifying the included fungi. ‘When in doubt, throw it out!’ The third section provides a three-part visual symbol indicating the ease of identification of each fungus depicted:

1. A black and white symbol of the brochure means that fungi displayed with this emblem are relatively easy to identify.

2. Moderately difficult to ID fungi have been assigned a logo containing couple of stacked field guides.

3. The third figure features 3 stacked books seen through a large magnifying glass for challenging fungi that have several lookalikes, some of which might be toxic.

Additionally, 2 different edibility symbols are posted with each entry: ‘choice edibles’ are marked with 2 forks displayed within a circle and ‘good edibles’ are marked by a circle containing just one fork. There are also a few brief general remarks on fruiting seasons of various fungi and on the variability in their respective sizes depending on conditions and the age of specimens.

The second facing page includes a quick and easy guide to preparing your own medicinals, for making tinctures, teas, salves and creams, as well as daily dosage recommendations. It ends with a cautionary statement about consulting the advice and guidance of an expert, and not relying solely on the photos in the brochure-booklet to confirm the identification of fungi readers may want to try.

The first fungi included are genera within the Polyporales of the Basidiomycota. Above each photo and associated information on the identifying characteristics and traditional or folk medicinal uses of each species discussed is the scientific name and common name printed in white against a dark teal- green horizonal strip. The polypores included are: Fomes fomentarius, Fomitopsis betulina, Fomitopsis pinicola, Ganoderma tsugae, Ganoderma applanatum, Laetiporus sulphureus, Laricifomes officinalis, Phellinus ignarius, Inonotus obliquis, Trametes betulina, Trametes versicolor, Grifola frondosa, Polyporus umbellatus and Sparassis radicata. Oddly, Cyathus striatus, in the Agaricaceae family has been placed in the Polyporales. (Undoubtedly this was an oversight.) The next group to be featured are cap and stem gilled fungi in the Agaricales: Agaricus subrufescens, Coprinus comatus, the Armillaria mellea group of honey mushrooms, Flammunlina velutipes, Lentinula edodes, Lyophylum decastes, the Pleurotus ostreatus group of oyster mushrooms, Hypsizygus spp., Psilocybe cubensis and Schizophyllum commune.

Labeled in white against a brownish horizontal bar are Hericium erinaceus, Hydnum repandum, Phallus impudicus, Auricularia auricula, and Tremella mesenterica. The text accompanying the stinkhorn mistakenly says that Phallus ravenelii differs from P. impudicus in that the volva is of the former is tinted purple. I believe the species with the purple tinted volva is actually Phallus hadriani. Three fungi from the Ascomycota are listed against a blue stripe: Cordyceps militaris, species of Morchella and of Xylaria.

An Excel-like listing of all 33 fungi included in the booklet is on the left side of the next to the last page, and a vertical listing is at the top on the right side indicating 21 of the traditional medicinal effects or uses of fungi. The symbol of a golden mushroom is placed in the spaces adjacent to the alphabetically arranged botanical name of each fungus treated in the booklet indicating the purposes and range of therapeutic effects one might expect as a result of consuming them. The back page gives a concise overview of the purpose of the booklet and biographical information on the authors, Daniel Winkler and Robert Rogers.

The booklet was designed by Daniel Winkler. NAMA members should be aware of his talents as a photographer, given the many stunning award- winning photos he has submitted for NAMA’s annual photography contests. He contributed 51 of the total in the booklet, while Robert Rogers contributed 9. Five other photos were taken by four additional mushroom photographers. Most of the booklet’s photographs are well-done, if rather small, but given the size of the booklet, and the need to include identification, medicinal use information, and symbols on identification ease and edibility, the authors addressed these limitations fairly well. A few shots are a bit on the dark-side (particularly the center one of 3 Ganoderma tsugae photos, one of 2 shots of Flammulina velutipes, and the wood ear fungus). They would have benefited from highlighting the surface textures in a photo editing program.

A Field Guide to Medicinal Mushrooms of North America will appeal to people who believe in the efficacy of medicinal fungi used historically in various cultures, or who at least see no problem experimenting with them for either preventative or curative purposes. Assuming advocates do not overdose on suggested dosages, they are relatively safe to take. Despite the existence of numerous trials to determine their efficacy, so far studies suggest that they may work, but there are no published evidence- based trials to date which prove they do so. As the authors say, do your homework.