NAMA‘s Mycophagist‘s Kitchen is committed to the delicious, safe, and interesting preparation of wild and cultivated mushrooms. We offer programs in mushroom cookery and preservation which draw from a wide variety of ethnicities and styles. 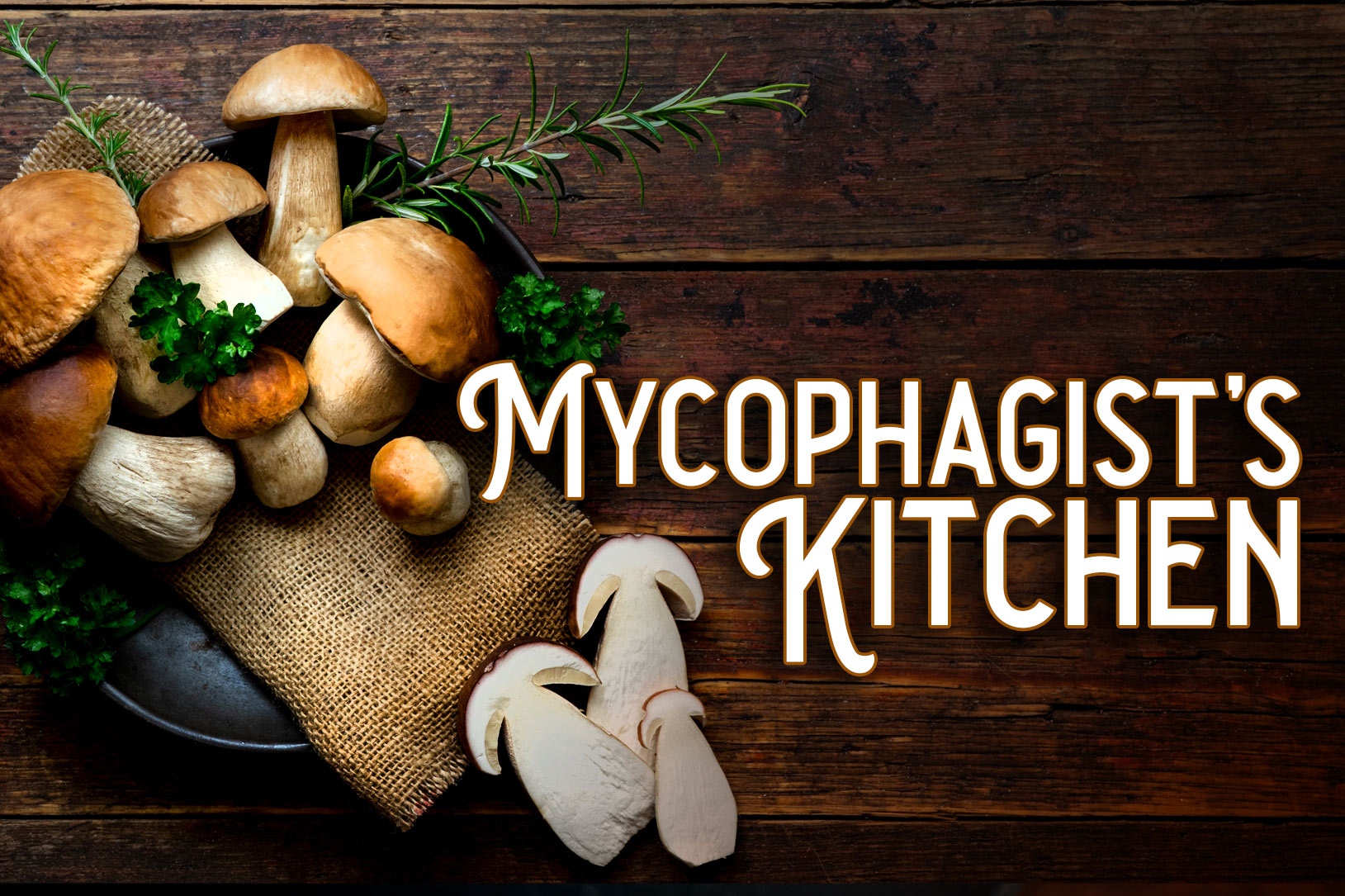 We promote and share knowledge of all aspects of mycophagy, including cooking demos, recipes, medicinal preparations (teas and tinctures), interviews with mushroom chefs, and tips on handling the variety of flavors, textures, and toxicities of wild mushrooms. 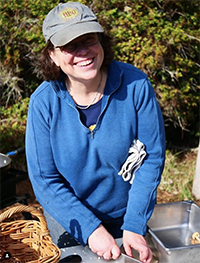 Julie has been collecting, cooking, and eating mushrooms for 30 years. As a professionally trained chef, she has been teaching others about cooking and eating mushrooms for a significant portion of those three decades. In addition to her personal passion for good food and cooking, her formal training in the food and wine industry includes degrees in Hotel Restaurant and Travel Administration from the University of Massachusetts, Culinary Arts from the Culinary Institute of America, and a Master’s Degree in Enology from the University of California at Davis.

She is a business partner in Mycoventures (https://www.mycoventures.com/wam), a company that organizes local and international mushroom forays. She organizes the events, helps lead the forays, and teach people how to cook cultivated and wild mushrooms.

Most recently she has become the Culinary Committee Chair for the North American Mycological Association (NAMA).
Visit her webpage at: https://chezjulies.com/ 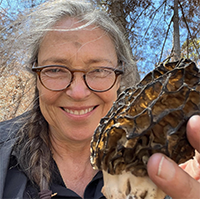 Eugenia Bone is an internationally known food and science writer. Her work has appeared in many anthologies, magazines, and newspapers, including The New York Times, The National Lampoon, Saveur, Gourmet, BBC Science, and The Wall Street Journal, where she is a frequent book reviewer.

She is the author or co-author of eight books on food and biology, most recently, the Fantastic Fungi Community Cookbook. She is currently writing her 9th book, about psychedelic mushrooms for Macmillan Publisher (December, 2023). She has been nominated for a variety of awards, including the Colorado Book Award and James Beard Award.

Eugenia has been featured on many dozens of radio shows and podcasts, most recently Local Motion: The North Fork and Knife featuring Eugenia Bone  and the BBC series Fungi: The New Frontier https://www.bbc.co.uk/programmes/m00132xm She has lectured widely in diverse venues like The New York Public Library, the Denver Botanical Garden, Burning Man 2022, and the Reuben Museum. She is featured in the documentary directed by Louie Schwartzberg, Fantastic Fungi (2019), and in the Netflix children’s show about food, Waffles + Mochi (the mushroom episode) produced by Michele Obama’s Higher Ground Productions. 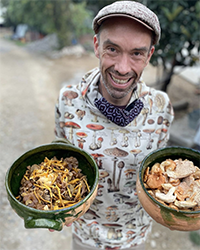 Zachary (@chefmazi) has worked in kitchens and food service since 1992, starting washing dishes for his high school kitchen during his lunch break through running the kitchen at his own restaurant (ul.te.ri.or. restaurant and bar) with business partner Tighe Melville in Santa Cruz, CA 2016-2017. His last efforts in the kitchen was cooking for immersive retreats, where he experimented with cooking one cuisine for the entire week: he has taken deep dives through Mexican, Oaxacan, Spanish, Israeli/Palestinian, Thai, and Pacific Northwest, with brief forays into Vietnamese, Greek, Singaporean, Portuguese and more.

Though they intended to move to Oaxaca in April of 2020, instead his partner (now fiancé) Kim Hunter and he ended up staying in Northern Thailand for the pandemic, finally returning to the US in August of 2021. Working with local grandmothers, he learned the depths of Northern Thai Cuisine, and wrote a cookbook on the same.

Since 2001, he has been an avid mushroom hunter, and became known as The Mushroom Chef, and has been presenting a speaking at Mycological events and camps (especially SOMA camp) since 2013, exploring the science of cooking and eating mushrooms, a study known as mycophagy.

Kim and Zachary moved to Oaxaca, Mexico in March of 2022. They lead mushroom retreats there with their Zapotec partners Celestino Mendez and Dr. Samuel Lazo This year they are exploring dyeing with mushrooms with Alissa Allen and Cheshire Mayrsohn. You can find out more about these retreats at mycophagybook.com/oaxaca). 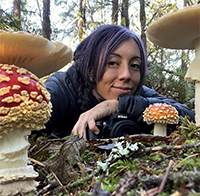 Jess is an author, naturalist, herbalist and wild food chef with a Masters of Science degree in Herbal Medicine. She recently published "Mushroom Wanderland: A Forager’s Guide to Finding, Identifying and Using More Than 25 Wild Fungi" with Countryman Press.

Jess has worked as a wild food consultant and forager for Los Angeles chefs Aitor Zabala of Somni and Niki Nakayama of n/naka. Jess has been teaching wild foods and nature education classes for children and adults since 2014.

She founded The Wild Path School—a wild food apprenticeship and education program—in 2020 that strives to connect the community to nature and the foods we eat in a positive, healing and sustainable way. She also leads immersive foraging adventures, multi-course gourmet wild food dinners and other food-focused experiences on the West Coast, Southwest United States and Mexico.

She is also the editor of The Sporeprint and heads up the Mycophagy & Culinary Group (McLAMS) for the Los Angeles Mycological Society. 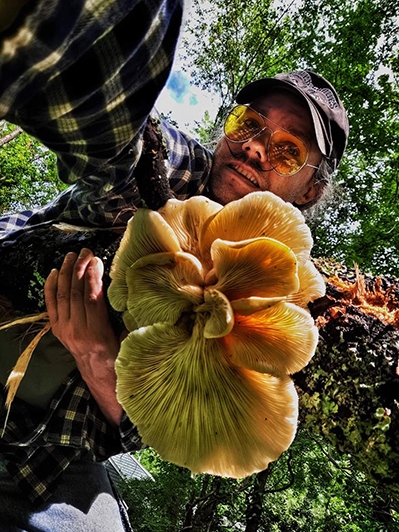 Spike is the Executive Chef at Pot au Feu Bistro in Providence, Rhode Island where he gets to prepare & serve foraged ingredients you can't find on any other menu in New England.

Spike is Rhode Islands first mushroom forager approved by the state to sell wild mushrooms commercially & teaches the state's certification program once a year for those also interested in foraging mushrooms for local restaurants and markets.

During rainy season, Spike enjoys studying the Amanitaceae, some of which make up his top ten edibles. Unfortunately for Rhode Island, there are NO Amanita approved for sale, so you will not find them on the menu at Pot au Feu.

He does, however, get to utilize his experience as an Amanita Expert & Northeast Specialist for the 'Poisons Help; Emergency Identification for Mushrooms & Plants' Facebook group as an identifier. (https://www.facebook.com/groups/144798092849300/).

In the off-season, he has taken a fascination to learning Food Molds and Plant Pathogens commonly seen in the modern kitchen, observing occurences like "sour-rot" on sweet potato caused by Geotrichum candidum (which is utilized in cheese making) or garlic bulbs being parasitized by Penicillium corymbiferum (known for it's antibiotic properties).

Spike has a few of his dishes featured on Instagram at @1wd2ef3rg4th5yj6uk7il
He also has some educational Amanita Identification videos on his YouTube Channel at https://youtube.com/user/Seditious100. 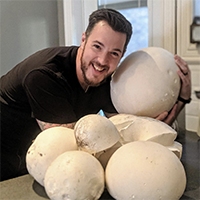 Robert is a former chef, educator, President of the Ottawa Mycological Society and creator of Think Fungi, a non-profit focused on fungi-related events and courses. Robert is our Canadian culinary ombudsman!

Robert began foraging mushrooms for the first time in 2010 as a chef in Europe, and it completely changed his outlook on life.

Having retired from the kitchen in 2013, Robert has been focused on his love of mushrooms and has been active in bringing the world of fungi to the masses through his events and courses on just about anything fungi-related. 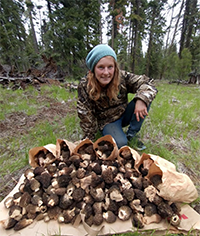 Kayla Sulak is a nature photographer and mushroom forager who lives a nomadic lifestyle based out of her vehicle in Central Oregon for the last 6 years.

An avid campfire chef, she picked up an interest in mycology simply from spending a lot of time in the woods, seeking to incorporate foraged foods into her backcountry meals as much as possible.

A few of her favorite mushrooms to eat include Admirable Boletes (especially in a lemon cream sauce), and Bear's Head fried simply with butter. When she's not foraging, she loves hiking to epic vistas, trout fishing in the high mountain lakes, and crabbing for Dungeness or clamming on the Oregon Coast.

Join NAMA
A Word of Caution:

You should not eat any mushroom that you cannot identify with 100% accuracy.