Note: this article is continued at Part Two: More About Mycorrhizae

The first single-celled fungi appeared on planet Earth nearly a billion years ago.  By the time plants colonized land in the Silurian (443 to 416 million years ago) and Devonian periods (419 to 359 million years ago), fungi in the phylum Mucoromycota had developed an arbuscule, a tree-like structure capable of colonizing plant cells and exchanging nutrients. This evolutionary step resulted in the first plant-fungal symbiosis, arbuscular mycorrhiza. Arbuscules can be found in fossils from 450 million years ago; these ancient structures are very, very similar to arbuscules we see today.

Mycorrhizae are present in 92% of plant families (80% of species).  Plants allow, and indeed require, mycorrhizal fungi to colonize their roots. In this symbiotic relationship, fungal hyphae greatly expand the ability of plants to obtain nutrients and water. Fungi break down organic matter and weather mineral surfaces, and in so doing collect essential nutrients such as nitrogen, phosphorus, potassium, and nearly a dozen minerals.

Let’s look at three major types of mycorrhizal relationships: Ectomycorrhizal, Arbuscular (often formally referred to as Vesicular-Arbuscular), and Ericoid. There are structural and functional differences between these types: how they colonize roots; the resources they provide; and the types of plants they partner with.

Ectomycorrhizae (ECM) are generally host specific, having evolved over the past 200 million years with their plant associates. Most ECM fungi are Basidiomycetes, forming fleshy fungal bodies. In this mycorrhizal type, hyphae cover the root tip with a mantle structure, and then form a Hartig net which penetrates into the space between the root’s cortical cells. Smith and Read describe the Hartig net as a labyrinthine inward growth of hyphae between the epidermal and cortical cells.  As the colonized root hairs grow and harden, the association becomes untenable in 2-5 years’ time. The hyphae constantly need to renew connections on new root growth.

ECM associations are generally with pines and hardwoods (gymnosperms and angiosperms). Even though they only represent 2% of mycorrhizae, ECM fungi colonize commercially valuable trees and produce edible fungi, vastly expanding their importance to humans. In the northern temperate regions, plants such as pine (Pinus), spruce (Picea), fir (Abies), poplar (Populus), willow (Salix), beech (Fagus), birch (Betula) and oak (Quercus) typify the ECM association. In total, 140 genera in 43 plant families have been identified as forming ECM.

Two additional types of mycorrhizas with characteristics of Ectomycorrhizae (plus five more minor variations) with a high degree of intracellular penetration, should be noted.

Ectendomycorrhiza: occurs primarily on Pinus and Larix and is distinguished by the fact that, in addition to a usually thin fungal mantle and well-developed Hartig net of the ECM type, the epidermal and cortical cells are occupied by intracellular hyphae (Smith and Read, 2008).

Arbutoid: found in ericaceous genera Arbutus (a genus of 12 accepted species of flowering plants in the family Ericaceae) and Arctostaphylos (a genus of plants comprising the manzanitas and bearberries) and genera of the ericaceous subfamily Pyrolae. It is distinguished from the Ectendomycorrhizal category by the restriction of intracellular penetration to the epidermal layers of the root and by the involvement of a distinct suite of largely basidiomycetous fungi more normally found as ECM symbionts of trees (Smith and Read, 2008).

Fossil evidence from the Devonian Period reveals a structure which looks exactly like modern AM fungi. Although the current theory is that plants and fungi arrived on land about the same time, Dr. Joey Spatafora postulates that arbuscular fungal bodies may have preceded plants.  AM is thought to have a monophyletic origin in the Ordovician, approximately 480 million years ago (Redecker et al., 2000; Delaux, 2017), and is found in the majority of land plants and virtually all ecological niches (Read, 2002; Wang and Qiu, 2006). 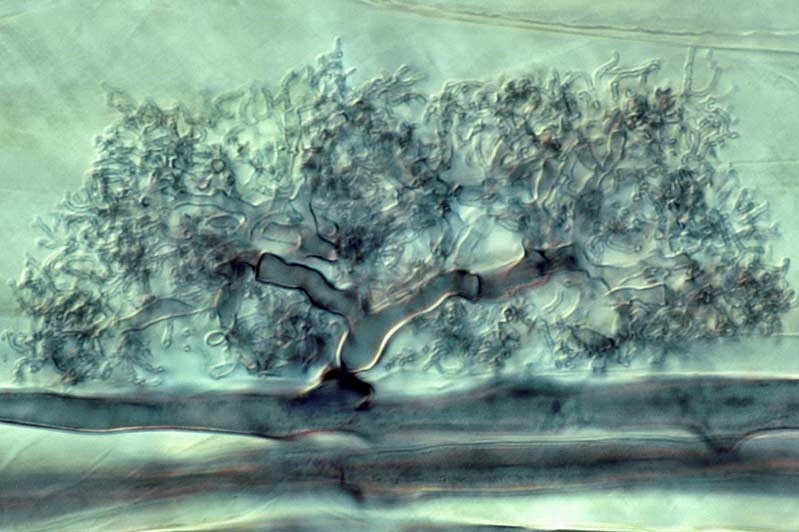 AM fungi are characterized by the formation of unique structures—arbuscules and vesicles—by fungi of the phylum Glomeromycota. AM fungi help plants to capture nutrients such as phosphorus, sulfur, nitrogen and micronutrients from the soil. AM fungi deliver about 90% of the phosphorus and 50% of the nitrogen needed by the host plant.

Arbuscules are short-lived structures (4-15 days) which provide nutrient transfer. Phosphorus is actively transferred to the plant throughout the life of the arbuscule. One reason for the short life of arbuscules could be that because their host plants grow so quickly, fungi constantly need to re-colonize new roots.

After the first arbuscules degrade, structures called vesicles often form within the colonized root. Vesicles, the second characteristic structure of AM mycorrhizae, are thick-walled structures. Vesicles contain large amounts of lipids, and often numerous nuclei. In dead root fragments, vesicles can act as propagules, and re-grow hyphae to colonize new roots (Smith and Read 1997). The hyphal network is relatively long-lived and is able to colonize new roots as they enter its domain.

No convincing evidence has been presented to suggest that AM associations are specific. Lack of specificity is indicated by the fact that globally only around 300–1,600 AM fungal taxa associate with about 200,000 plant spe­cies. In fact, in nature, plant roots are usually simultaneously colonized by multiple AM, which colonize several plant individuals at the same time, often from different species (Walder, 2015).  AM fungi colonize grasslands and cultivated agricultural plants, but also colonize trees such as Maples, Cedar, Redwood and Sequoia.

Ericaceous plants are generally found in the understory of a forest. They can also be found in alpine ecosystems and bogs in nutrient poor soils. We know ericaceous plants along the West Coast as huckleberry, manzanita, madrone and native rhododendron. In northern states, they’re represented by cranberries and blueberries. On the East Coast, ericaceous plants include magnolia and catalpa.

Plants in Ericaceae have dense fibrous roots which terminate in a structure called “hair roots”.  Because hair roots are “delicate structures”, these mycorrhizal associations are relatively short lived.  Ericoid mycorrhizae (ERM) are characterized by the formation of intracellular hyphal coils in the epidermis of hair roots and hyphae extended up to 1 cm from the root surface (Read, 1984). ERM typically lack multilayered hyphal mantles.

Note: this article is continued at Part Two: More About Mycorrhizae