The Way Through the Woods: On Mushrooms and Mourning 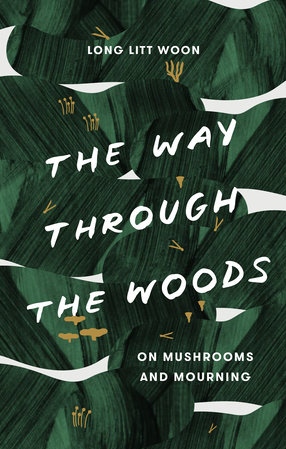 Spoiler alerts start early in The Way through the Woods by Long Litt Woon. The subtitle, “Of Mushrooms and Mourning,” warns us that something bad happens. And then, right there on the first page, her husband unexpectedly dies. “Eiolf went to work and didn’t come home.”

Woon (as her friends call her) weaves two narratives in this book, describing the devastating loss of her husband and how mushrooms (of all things) helped her to recover from grieving and find new meaning in life. You might say she found “Fungi, Fun and Friends” in other parts of the world. I like to think of her book as a story of “Lost and Found”.

Not sure what to do with herself without Eiolf, Woon signed up for a beginning mushroom class offered by the Greater Oslo Fungi & Useful Plant Society. It was something the two of them had discussed but never got around to. The aim of the course was to teach how to recognize about 15 different species of fungi. At the first class, Woon was quickly overwhelmed and intimidated by how much there was to learn. “I felt the fear of being the class dunce well up inside me.” After the first class, the next item was a field trip. “It was incredible to be able to use my newly acquired skills straightaway.” She soon became hooked and, before long, felt competent enough to take the certification test for mushroom inspectors. In Norway, mushroom inspection is so well established that people are directed to the Norwegian Mycological Association’s inspection service, which requires training and an official exam.

“I remember the moment I walked into the examination room. Along one wall was a long sideboard, and set out on this, on a row of paper plates, were the test mushrooms that awaited me. These I would have to identify one after another, in the order determined by the examiner. I sat at the end of a long table in the middle of the room. Way down at the far end sat the administrative director of the association, who was acting as observer. The proctor sat halfway between us, stone-faced, saying not a word. The examiner was the only one to move, shuttling briskly between the sideboard and me, furnishing me with a steady stream of test mushrooms. It seemed to be over in no time. After a short wait in the corridor, I was called in and informed of the results. I had passed. I was a certified mushroom inspector!”

“As most WPMC members know firsthand, it was hard to feel depressed when you were with Gary Lincoff.” Woon shares a couple of experiences with Gary, including this one in Central Park:

“While on a visit to America, I was invited on a private mushroom hunt in New York by no less a person than the late, great Gary Lincoff. We met as arranged in Central Park, said our hellos, and then, without any more ado, he began to march briskly and purposefully from one tree to another. I had to walk fast to keep up and not lose sight of my guide in one of New York City’s best hunting grounds. Then we came around a bend and there was one of the park rangers. He gave a little cough to attract our attention. “Have you been picking mushrooms?” the elderly ranger asked. We had been caught red-handed. “What sort is that” he asked amiably, pointing into Lincoff’s basket. Lincoff answered promptly, listing the species by their Latin names. “It is my duty to inform you that it is forbidden to pick flowers or plants in Central Park. There, my job is done!” the ranger said, grinning as he sauntered off.”

Later in the book, Woon describes another encounter with Gary Lincoff at the Telluride Mushroom Festival:

“My most spectacular find—a mushroom that aroused quite a lot of mycological interest—was made not in Norway, but in the United States. It happened on the last day of the Telluride Mushroom Festival. Gary Lincoff was reviewing all the mushrooms found on that day’s expedition. I was feeling a bit tired, so I sat down on a large rock nearby. Glancing around, I noticed two fairly large white mushrooms in the grass. When I showed the others my mushrooms, Lincoff gave a great whoop and almost jumped up and down with excitement. It seemed likely that what I had found was Boletus barrowsii, or the White King Bolete. My find was remarkable enough to be mentioned in Lincoff’s closing speech at the festival.”

Woon loves to cook and offers many suggestions for preparing mushrooms, including soup, mushroom bacon and jerky, roasted or pickled mushrooms, paté or sauces, and even desserts. By the end of the book, Woon realizes that she has made the transition from amateur to “hopeless mushroom freak...abnormally fixated on mushrooms.”